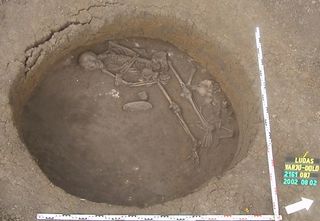 A Late Bronze Age burial from the site of Ludas-Varjú-dulo, Hungary dated to about 1200 B.C. This individual marks the onset of lactose tolerance in the region.
(Image: © Janos Dani (Deri Museum, Debrecen, Hungary))

The DNA from ancient human bones is shedding new light on the prehistory of Europe, such as when changes in skin color and lactose tolerance occurred, researchers say.

This research unexpectedly revealed that ancient Europeans started dairying thousands of years before they evolved genes to make the most of milk in adulthood, investigators added.

Scientists examined ancient DNA extracted from 13 individuals in archaeological burial sites unearthed during highway construction in the Great Hungarian Plain in Central Europe. This crossroads for Eastern and Western cultures experienced significant transformations in culture and technology known to have shaped European prehistory. The bones at the site span about 5,000 years, from 5,700 B.C. to 800 B.C., ranging across the Stone, Copper, Bronze and Iron Ages. [Image Gallery: Our Closest Human Ancestor Revealed]

After several years of experimentation with a variety of kinds of bones, the researchers discovered the best place to recover ancient DNA for analysis in humans is the petrous bone, a pyramidal bone at the base of the skull. The name petrous comes from the Latin word "petrosus," meaning "stonelike." The petrous bone is the hardest bone in the human body and very dense, forming a protective case for the inner ear.

"The high-percentage DNA yield from the petrous bones exceeded those from other bones by up to 183-fold,"the study's joint senior author Ron Pinhasi, an archaeologist at University College Dublin in Ireland, said in a statement. "This gave us anywhere between 12 percent and almost 90 percent human DNA in our samples, compared to somewhere between 0 percent and 20 percent obtained from teeth, fingers and rib bones."

The DNA the scientists recovered helped them systematically examine the skeletons. "Our findings show progression towards lighter skin pigmentation as hunter-and-gatherers and nonlocal farmers intermarried," Pinhasi said in the statement.

The scientists also found that great changes in prehistoric technology, such as the adoption of farming, and the first use of hard metals such as bronze and then iron, were each associated with the substantial influx of new people.

In the Neolithic or New Stone Age, ancient central Europeans did not look anything like modern central Europeans, "but were closer to Sardinians," or people from the Italian island of Sardinia, Pinhasi told Live Science. "With the Bronze Age, you get a total shift into populations that look more like Western Europeans, and in the Iron Age you get another shift, with people genetically coming from the East, such as the Caucasus or Asia. These shifts were probably associated with major migrations and population turnovers in Central Europe."

Surprisingly, Pinhasi and his colleagues found that ancient Central Europeans apparently remained intolerant to lactose, the natural sugar in the milk of mammals, until the Bronze Age, about 4,000 years after these people began dairying. Artifacts that archaeologists previously unearthed suggest ancient Europeans started dairying 7,500 years ago in the Neolithic period. Most of the world is lactose intolerant, unable to digest lactose as adults, and the evolution of the ability to break down this sugar in adulthood helped Europeans take advantage of animal milk, a highly nutritious food.

"These ancient Europeans would have raised domesticated animals such as cows, sheep and goats without having yet developed the genetic tolerance for drinking milk from mammals without problems," Pinhasi said.

Pinhasi suggested ancient Europeans may have practiced dairying "not to drink milk, but to consume milk products such as cheese and yogurt," he said. "The processes that make cheese and yogurt break down lactose. Nowadays, in the Caucasus region, most people eat cheese and yogurt, but milk drinking is not a big thing."

The scientists are now sequencing even more ancient human genomes dating back 13,000 years from the Caucasus and other parts of Europe "to find out about genetic diversity that existed before and after the Ice Age," Pinhasi said. "We are also analyzing ancient farmers to find out who the first farmers truly were."

The scientists detailed their findings online Oct. 21 in the journal Nature Communications.