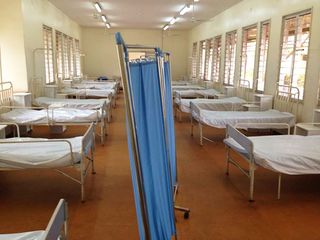 Now that 42 days have passed without any new cases of Ebola in Nigeria, the country is officially Ebola-free, the World Health Organization declared today.

On July 20, an ill passenger from Liberia brought the Ebola virus to Lagos, which, with a population of 21 million, is the largest city in not only Nigeria but all of Africa.

From patient zero, the virus spread to 19 more people, eight of whom died of the disease. But the outbreak was contained, and no further cases have developed since then.

"This is a spectacular success storythat shows to the world that Ebola can be contained," Rui Gama Vaz, the head of WHO's country office in Nigeria, said at a news conference in the city Abuja, according to Al Jazeera.

The Nigerian Ebola outbreak occurred in a setting that had all the elements that could have allowed it to turn into a much bigger outbreak, similar to the one now ravaging Guinea, Sierra Leone and Liberia. Lagos has as many residents as the combined population of those three countries, and is also a major transit hub in the region, with air, land and sea ports of entry, according to the country's officials.

"The dense population and overburdened infrastructure create an environment where diseases can be easily transmitted and transmission sustained," researchers wrote in an Oct. 3 report published by the U.S. Centers for Disease Control and Prevention.

But a rapid, coordinated response halted the outbreak in its tracks. By late September, about 900 people — nearly everyone who'd had contact with patient zero and another person he infected — were identified, interviewed and monitored. Approximately 18,500 face-to-face visits were conducted by investigators from the Nigerian Center for Disease Control and the State Ministry of Health to achieve this, according to the report.

People who were suspected of having Ebola were transported to an isolation ward, and those who tested positive for Ebola were moved to a treatment center.

People can contract Ebola if they have contact with the bodily fluids of a person who is sick with the virus. It can take between two and 21 days for an infected person to start showing symptoms. [5 Things You Should Know About Ebola]

After 21 days, if an exposed person does not develop symptoms, he or she will not become sick with Ebola, according to the CDC. But for WHO to declare an Ebola outbreak over, a country must pass 42 days (twice the incubation period for Ebola virus) with no new cases detected. Moreover, active surveillance must be in place to detect "chains of transmission that might otherwise remain hidden," according to WHO.

Another key reason that Nigeria overcame its Ebola crisis was the country's virology laboratory at the Lagos University Teaching Hospital, where researchers were able to quickly diagnose cases, according to WHO.

People were also educated about the disease via social media and TV programs delivered by Nigerian movie celebrities.

Nigeria remains on "high alert," with officials looking out for other imported cases of Ebola. But its success story shows other countries that with a proper response, Ebola can be controlled.

"If a country like Nigeria, hampered by serious security problems, can do this ... any country in the world experiencing an imported case can hold onward transmission to just a handful of cases," Dr. Margaret Chan, WHO director-general, wrote in a statement.