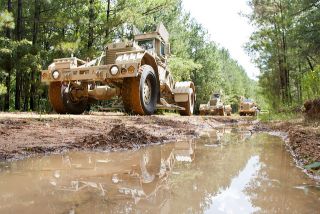 A convoy searches for improvised explosive devices at McCrady Training Center in Eastover, South Carolina. The Department of Defense is evaluating its facilities, like this one, to determine whether they could be damaged by extreme weather events.
(Image: © U.S. Air National Guard photo by Tech. Sgt. Jorge Intriago/Released)

The U.S. Department of Defense released a new report this week that says climate change poses an "immediate risk to national security." The so-called road map is designed to help the military navigate and prepare for increasing global temperatures, changing rain patterns and rising sea levels.

Climate change is a "threat multiplier" that could intensify challenges such as global instability, hunger, poverty and conflict, U.S. Secretary of Defense Chuck Hagel said Monday (Oct. 13). Hagel presented the road map during aspeech at the 11th Conference of the Defense Ministers of the Americas, which is being held in Peru.

"The loss of glaciers will strain water supplies in several areas of our hemisphere," Hagel said in a statement. "Destruction and devastation from hurricanes can sow the seeds for instability. Droughts and crop failures can leave millions of people without any lifeline and trigger waves of mass migration." [8 Ways Global Warming Is Already Changing the World]

The report, called the 2014 Climate Change Adaptation Road Map, details the military's progress in surveying more than 7,000 bases, installations and other facilities to determine whether they are threatened by extreme weather.

For instance, the largest concentration of U.S. military sites, located in the Hampton Roads region of Virginia, has recurrent flooding. In response, the Defense Department is addressing how a projected 1.5-foot (0.5 meters) sea-level rise could affect the complex over the next 20 to 50 years.

"Our coastal installations could be vulnerable to rising shorelines and flooding, and extreme weather could impair our training ranges, supply chains and critical equipment," Hagel said. "Our militaries' readiness could be tested, and our capabilities could be stressed."

By preparing for climate change now, the Department of Defense may be able to reduce the impact of extreme weather events in the future, experts said.

"The road map lays out reasonable adaptation and mitigation actions to ensure or at least bolster our national security against measured and measurable climate change events, whatever the causes," retired Navy Adm. Frank Bowman said in a statement. Bowman is an advisory officer at The Center for Climate and Security, which is a policy institute with an advisory board staffed by retired military officers and national security experts.

The Department of Defense has released reports on climate change since 2003, but the new road map is one of the most assertive and strongly worded in regard to global warming, said Joshua Busby, an associate professor of public affairs at the University of Texas at Austin.

"What's a little different about this report is they're not talking about climate change as a distant threat, but as something we're already experiencing," Busby told Live Science.

In fact, Hagel highlighted places that are already being affected by climate change, including the Sahel region of Africa, where desertification is putting millions of people at risk. "[And] two of the worst droughts in the Americas have occurred in the past 10 years — droughts that used to occur once a century," he said.

However, the military is also a big climate change player. A federal greenhouse gas inventory found that the Department of Defense contributed 71 percent of the federal government's carbon footprint in 2010, producing 95.4 million tons of carbon dioxide, reported the Associated Press. That's about the same size as Chile's carbon footprint, the AP found.

But the new road map is focused on adaptation and how to deal with the consequences of climate change, rather than how to reduce emissions, Busby said. And the report doesn't oversell or underplay climate change's effects, he said. "They're trying to approach it with a sober, pragmatic approach."

In two months, The United Nations will convene in Peru to discuss climate change, and the militaries of the world should participate in the discussion, Hagel said.

"We must be clear-eyed about the security threats presented by climate change, and we must be pro-active in addressing them," he said.