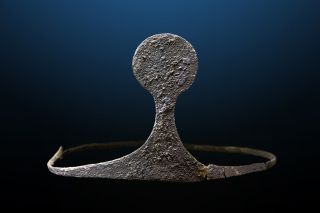 A silver diadem discovered in a Spanish Bronze-Age tomb, perched atop the head of a female skeleton. The tomb is at the site of La Almoloya, which was a power center for the El Argar civilization of this era.
(Image: © Universitat Autònoma de Barcelona (UAB))

A Bronze Age woman buried in Spain wore a symbol of her wealth and power on her head: an elegant silver crown.

The silver circlet was one of several dozen precious items found in the woman's tomb, which she shared with a male adult. The tomb sits in the La Almoloya plateau, located in southeastern Spain. Between about 2200 B.C. and 1550 B.C., this site was a bustling political center, with multiple residential complexes and tombs.

La Almoloya was first discovered in 1944, and seems to have been the seat of the Bronze Age El Argar civilization, which is known for its sophisticated bronze and ceramic artifacts. Now, researchers from the Universitat Autònoma de Barcelona have excavated dozens of new buildings and 50 new tombs at the site, including the joint tomb holding the silver circlet. [See Photos of the Bronze Age Tomb and Treasures]

That tomb stands out because the man and woman inside are curled into flexed positions and surrounded by precious and semi-precious objects, the archaeologists said. Other than the woman's tiara, the tomb contained silverrings, earrings and bracelets, as well as a bronze dagger nailed to its handle with silver fastenings. A delicate ceramic cup was gilded with silver on the rim and exterior, representing some of the earliest silverwork seen on such a vessel, the researchers reported.

Some of the tomb treasures were rare, indeed. The researchers uncovered a metal punch, a tool used to create holes; it has a silver handle and bronze tip and is unlike any other item from the region and era that archaeologists have ever discovered. The tomb also contained four ear dilators, which would have been used to stretch the earlobes after piercing, like modern ear gauges. Two of the dilators were silver, and two were gold.

The silver circlet itself is an unusual find. Only four other diadems from the El Algar civilization have ever been discovered, the researchers said. None of those diadems remain in collections in Spain.

The buildings found in La Almoloya are stone and mortar, with some stucco decorations. The site not only reveals Bronze Age construction techniques, but also hints at the political structure of the era, the researchers noted.

The treasure-filled tomb sits right next to another newly discovered structure, a high-ceiling hall about 750 square feet (70 square meters) in area. The hall is part of a palatial complex, which includes several other rooms.

Benches line the walls of the hall, offering seating for 64 people around a ceremonial fireplace and podium. The archaeology team suspects this hall was the Bronze Age version of a courtroom or conference room, used for hearings and government meetings. If so, it is the first Bronze Age government building ever discovered in Western Europe, the archaeologists reported.