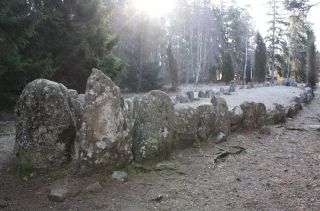 People living in the Baltic Sea region during the Bronze Age built monuments to their sea-loving lifestyle, arranging large stones in the shape of life-size ships.

Archaeologists think these 3,000-year-old stone ships were used as symbolic vessels to carry the dead into the afterlife, since bones and urns are often unearthed from the sites. But one researcher believes Scandinavia's stone ships were also useful to the living, as ritual gathering spaces and possibly even teaching tools.

"These could have been used for other rituals and activities related to maritime life, such as teaching of navigation and embark/disembark ceremonies," Joakim Wehlin, from the University of Gothenburg and Gotland University, told LiveScience in an email.

The stone ships can be found across the entire Baltic Sea region, but are especially prevalent on the larger islands, like Sweden's Gotland. Wehlin said he analyzed the archaeological material from these Bronze Age sites and looked at their placement in the landscape to understand how people would have used the stone ships.

"It seems like the whole body was typically not buried in the ship, and some stone ships don't even have graves in them," Wehlin said in a statement. "Instead, they sometimes show remains of other types of activities. So with the absence of the dead, the traces of the survivors tend to appear."

Some of those traces of the living include fire places, fire pits, flint flakes from tool making, burnt layers, charcoal, traces of wood constructions and post holes, Wehlin told LiveScience. He also believes his understanding of the ships can help identify new meeting places, or early ports in the Baltic region, that date back to the Bronze Age.

"These consist of areas that resemble hill forts and are located near easily accessible points in the landscape — that is, near well-known waterways leading inland," Wehlin said in a statement. "While these areas have previously been thought to be much younger, recent age determinations have dated them to the Bronze Age."

Wehlin's research is detailed in a thesis that has not yet been published in a peer-reviewed academic journal.