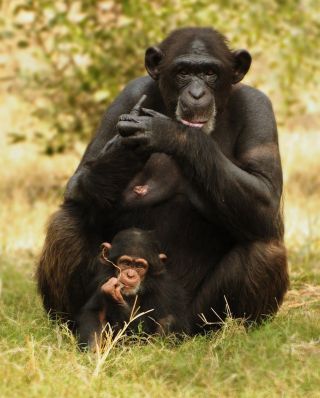 The case of Tommy the pet chimpanzee goes back to court this week, and a group of judges could decide whether he should be recognized as a "person" under the law.

The organization advocating for Tommy will appeal a 2013 decision that denied the captive ape a writ of habeas corpus in New York.

A writ of habeas corpus is intended to protect people from unlawful detention. Last December, the Nonhuman Rights Project asked the state Supreme Court for a writ of habeas corpus on behalf of Tommy, a caged chimpanzee in Gloversville, New York. Tommy, the organization argued, was being held against his will in solitary confinement and should be released into a sanctuary that closely mimics a natural environment. [8 Humanlike Behaviors of Primates]

The state Supreme Court rejected the case at the time, but the Nonhuman Rights Project wants that decision reversed. Tomorrow afternoon (Oct. 8), representatives from the organization will appear in front of five judges at the New York Supreme Court Appellate Division, Third Department, in Albany, to argue that chimpanzees fit the definition of a "person."

If they are shut down again, the representatives will take their case to the highest court in New York, the Court of Appeals, said Steven Wise, the founder and president of the Nonhuman Rights Project.

Wise was emphatic that his organization is not seeking human rights for chimpanzees.

"Personhood is the legal word, but it's not synonymous with human," Wise told Live Science.

In a 65-page brief filed with the appellate court, the Nonhuman Rights Project draws on evidence from scientific studies to argue that chimpanzees are autonomous, self-aware, highly intelligent beings that fit the profile courts have previously used in recognizing "legal persons."

Because of the ongoing case, Wise and his organization are not allowed to communicate with Tommy's owner, Patrick Lavery. (Wise said that Lavery and his lawyer have not submitted a brief to oppose the Nonhuman Rights Project and are not expected to appear in court on Wednesday.) Wise does not know much about Tommy's current condition other than that he appears to be alive, Wise said.

Because of the novelty of the case, Wise said he knew that the odds of winning right away were not very good, but he was encouraged by the response from the scientific and legal community when the case made headlines last year. (Months before the case even went to court, it was featured in a cover story in The New York Times Magazine.)

In another sign of encouragement, the appellate court in July granted a preliminary injunction to prevent Tommy's owners from removing him from New York State pending the court's decision. The court would only make such a move for cases that have some reasonable likelihood of success, Wise said. The organization is expecting a written decision a few weeks after the court date.

The Nonhuman Rights Project is also looking beyond habeas corpus cases; the organization is developing other causes of action and lawsuits on behalf of other chimpanzees and perhaps other animals, such as elephants, Wise said.

"It's really just the beginning," Wise said. "Win or lose, we will push forward."