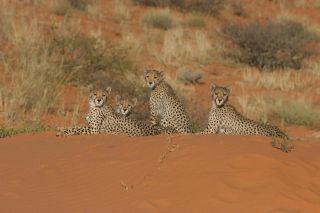 The powerful cheetah is known for its elegant and rapid sprint that helps it hunt animals big and small, from antelopes to rabbits. But as cheetah numbers have dwindled from an estimated 100,000 in 1900 to about 10,000 today, some researchers have wondered whether the big cat's famous sprint costs it too much energy, ultimately harming the animal.

Now, new research shows this isn't the case. Nor are hyenas and lions, which often steal the cheetah's hard-won food, to blame for the cheetah's decline. Instead, human interference in cheetah territory is harming the big cat's ability to find food, the researchers found.

The researchers studied 19 wild cheetahs living in two reserves in South Africa, one in the Kalahari Desert and the other in a wetter area in the Karongwe Private Game Reserve, said lead researcher Michael Scantlebury, a lecturer of biology at Queen's University in Belfast, Northern Ireland. [Life of a Big Cat: See Stunning Photos of Cheetahs]

After capturing the cheetahs, the researchers put radio collars on the cats and injected them with isotope-laden water (an isotope is a variation of an element). They followed each cheetah for two weeks, and recorded the cats' behaviors, such as lying, sitting, walking and chasing prey. The team also analyzed the rate at which the cats excreted the isotopes in their poop, which allowed the researchers to calculate how much energy the cheetahs used in their daily activities, such as catching prey.

Surprisingly, the cats spent most of their energy walking long distances to find prey, they found. Habitat loss and human involvement, such as putting up fences or barriers, both contributed to the extended walking, the researchers said.

"What our study showed was that their major energy costs seem to be incurred by travelling, rather than securing prey," Scantlebury said in a statement. "If you can imagine walking up and down sand dunes in high temperatures day in, day out, with no water to drink, you start to get a feel for how challenging these cats' daily lives are, and yet they remain remarkably adapted and resilient."

The new study also dismisses the idea that lions and hyenas were causing a large dent in the cheetah population by stealing their meals.

"It seems that the cheetah is able to cope with larger predators and the occasional loss of food without too much difficulty," Scantlebury said. "For prey theft to be a factor, cheetahs would have to have their meal stolen over 50 percent of the time, which is not the case with the animals we studied."

Instead of blaming other cat predators, people should reassess how human actions affect the endangered animals.

"Imagine how hard it must be for a small cub to follow its mother farther and farther through the desert to look for food, while she herself is fighting for survival," said John Wilson, who worked on the project while completing his doctoral degree at North Carolina State University.

The study was published online yesterday (Oct. 2) in the journal Science.