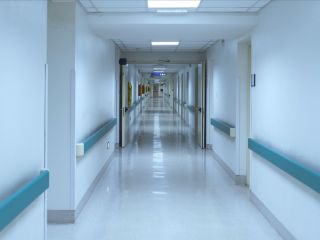 The first patient to be diagnosed with Ebola in the United States is receiving treatment while isolated in a Texas hospital, but what does such isolation involve, and how exactly do doctors ensure the deadly virus doesn't spread to others?

Experts say that hospitals routinely isolate patients with infectious diseases, and the type of isolation required for an Ebola patient would be the same as what is already done for hospital patients with the flu or meningitis.

Yesterday, health officials announced that a patient at Texas Health Presbyterian Hospital in Dallas tested positive for the Ebola virus and was in isolation. The man recently flew to the United States from West Africa, a region that is currently experiencing the worst outbreak of Ebola in history. The man has been identified as Thomas Eric Duncan, a resident of Liberia, according to the New York Times.

The first step in isolation involves putting a patient in a private hospital room, or in a room with someone with the same infection, said Dr. Amesh Adalja, an infectious-disease physician at the University of Pittsburgh. [5 Most Likely Real-Life Contagions]

Then, doctors follow different protocols depending on the type of infection the person has — including whether the infection can be spread by physical contact, by droplets of body fluids or through the air, Adalja said.

If the infection can spread long distance through the air, like tuberculosis, doctors would take all the precautions that are needed for an illness spread by droplets, but they would also wear a special respirator mask that filters airborne particles, called an N95 mask, Adalja said. In addition, patients with an airborne infection would be placed in a negative-pressure room, which prevents contaminated air from escaping into a hospital, Adalja said.

When treating an Ebola patient, doctors would take both contact and droplet precautions, just like they would with a patient who had the flu or the recent enterovirus D68, Adalja said. Some hospitals might take airborne precautions, but that would go beyond what's recommended by the Centers for Disease Control and Prevention, because Ebola is not spread through the air. (Ebola is spread by contact with bodily fluids.)

"It's understandable that a lot of hospitals are nervous about taking care of Ebola patients," and would take airborne precautions, Adalja said. But "that’s not necessary," he said.

These rooms have negative pressure and contain their own lab facilities, and doctors who treat patients wear full-body, hazmat suits. These facilities were designed to treat patients with airborne diseases like severe acute respiratory syndrome (SARS), Adalja said.

This level of protection goes "above and beyond what's required for infection control" of Ebola, Adalja said. In a way, it was unfortunate that the previous Ebola patients were treated this way in the United States, because "it gave a false impression to the public that that's what you needed to take care of an Ebola patient," Adalja said.

The Dallas hospital currently treating the Ebola patient may want to keep the patient in a room that's in a part of the hospital that's less busy, in order to have more control over who goes in and out of the room, Adalja said.

Still, there's no need for patients or visitors to the Dallas hospital to be worried about Ebola infection, Adalja said. In a U.S. hospital, "TB is a bigger infection threat than Ebola," because TB is airborne, Adalja said.