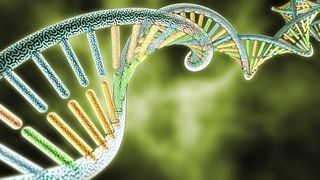 Evolution is often said to be "blind," because there's no outside force guiding natural selection. But changes in genetic material that occur at the molecular level are not entirely random, a new study suggests. These mutations are guided by both the physical properties of the genetic code and the need to preserve the critical function of proteins, the researchers said.

DNA is made up of a sequence of letters, or amino acids, which encode proteins, the structures that carry out important jobs inside cells. Conventional wisdom states that evolution occurs by random mutations that make an individual organism better able to survive and reproduce, according to natural selection.

In the study, published Sept. 30 in the journal Royal Society Open Science, fisheries biologists Michael Garvin and his colleague Anthony Gharrett, of the University of Alaska Fairbanks, in Juneau, set out to see whether or not these mutations were truly random. [Unraveling the Human Genome: 6 Molecular Milestones]

In a previous study, Garvin and his colleagues analyzed the DNA from a number of species that encode a complex of proteins whose job is to produce ATP, the energy-rich molecule that powers cells. Changes in these bits of DNA allow a species to adapt to its environment, so they are said to be under "positive selection."

One day, Garvin was entering a DNA sequence for salmon into his computer, but he kept typing the sequence wrong, because there were so many repeats of the same two letters in the DNA, for example, "CACACACA," he said. These letters were right next to a positively selected site. He wondered if maybe the cell makes the same mistake in copying the repeated sequence when it replicates the DNA, perhaps including the wrong number of 'CAs,' for example. (These repeats themselves are not errors, but errors could be introduced in copying them.)

"It is kind of like buttoning up your shirt in the morning when you're tired and you miss one button," Garvin said. "Everything is off by one and there is a loop in your shirt and now you need to fix it. This loop is analogous to the DNA that needs to be repaired," he said.

When the cell is "fixing the buttons," the DNA has more time to mutate — a phenomenon called slip-strand mis-pairing. So these repeats — a physical property of the DNA — influence the mutation rate, the researchers said.

But even as a section of DNA is mutating, the sequence on either side of it, which contains the repeated section, cannot change too much or the protein won't work properly. The sequence would normally mutate until the repeat disappeared, but the need to preserve the sequence so the protein still works prevents the repeats from being eliminated. The result is a "mutational hot spot" in between stable DNA sequences, Garvin said.

In the new study, the researchers looked at all of the DNA sequences under positive selection (or those that help an organism adapt to its environment), to see whether they were near a repeated sequence. They found that 97 percent of the sites were.

To find out if other DNA sequences that don't undergo positive selection also mutate in this way, Garvin identified all of the repeated sequences in the DNA of the species studied. He found that 60 percent of all mutating sites were next to a repeat.

"So in the end, most mutation is not random, at least for the DNA sequences we analyzed here," Garvin said. Rather, it is a combination of two opposing forces — the mis-pairing during DNA replication and the need to preserve a protein's function, Garvin said.

The findings could explain why evolution occurs much faster than if mutations were, in fact, totally random, the researchers said. The repeated sequences may also be necessary for evolution, they said.

For example, genetic diversity at these DNA sites could help species adapt to changes in the availability of food and other resources that can result from climate change, Garvin said. So these repeat sequences could be used as a predictor for how a population will respond to environmental changes.

Editor's Note: This article was updated at 10:09 ET, October 2, to clarify the mistake cells make in copying repeating sequences of DNA.