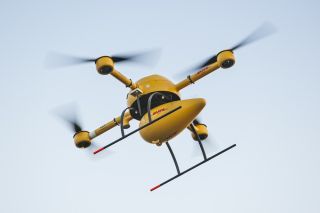 The DHL drone flies through the air.
(Image: © DHL)

The company's plan is to use small, parcel-carrying drones to deliver medications and emergency supplies to Juist, an island in Germany's North Sea, where more traditional delivery options (such as ferries or trains) aren't always available. The drone service is a continuation of DHL's "parcelcopter research project," which launched in December 2013.

But the DHL drones have changed significantly since their maiden flight, DHL officials said in a statement. For one thing, they've been modified to endure the high winds and rain that they may face over the North Sea. The parcelcopter 2.0 can reach altitudes of 164 feet (50 meters) and can fly as fast as 40 miles per hour (64 km/h). The drone is also capable of flying for extended periods of time — about 45 minutes before needing to be recharged — enabling it to make the roughly 7.5-mile (12 km) journey to Juist, according to DHL officials. [See photos of DHL's delivery drones]

Thanks to a new autopilot feature, the maiden flights of the new and improved drones will be completely automated, even during takeoff and landing, company officials said in the statement. However, drone pilots will be standing by at a mobile ground station in Norddeich, on the coast of mainland Germany, just in case something goes awry.

Once the drones land at Juist, the parcels (secured in a lightweight, weatherproof case) will be delivered to their recipients by a human courier.

For now, the company will be using the drones only when other delivery options aren't available, and no plans are currently in the works to incorporate the parcelcopters into normal day-to-day deliveries, according to company officials.

However, DHL does seem to be taking its drone delivery program seriously. The company sought full approval from government agencies to carry out the project. The German Ministry of Transport and Digital Infrastructure went so far as to establish a restricted flight area exclusively for use by DHL's parcelcopters.

And the company has good reason to keep moving ahead with its drone delivery option. Several other companies, including Amazon and Google, have already begun testing their own versions of parcel-delivery drones.

In December 2013, Amazon announced its futuristic Prime Air service, which would use drones to deliver packages straight from the online retailer's warehouses to customers' doorsteps — and quickly. In an interview with "60 Minutes," Amazon founder Jeff Bezos said the company hopes to get goods into the hands of shoppers in 30 minutes or less from the time of purchase.

Following on Amazon's heels is Google, which revealed its own drone delivery project in August. Dubbed "Project Wing," the Google effort is still in an early phase of development, according to the company, but the concept will likely be similar to other drone-delivery systems.

Unlike the Germany-based DHL, however, efforts by Amazon and Google have been stalled by the U.S. Federal Aviation Administration (FAA), which oversees the country's civil aviation but has yet to establish official regulations for the commercial use of drones. The FAA is expected to announce its rules in 2015, but until then, the development of delivery drones in the U.S. remains in regulatory limbo.