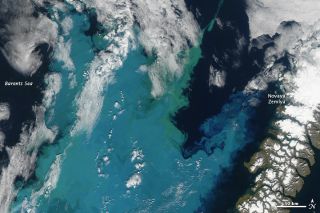 The Arctic's shrinking sea ice is reshaping the region's food web from the bottom up, a new study reports.

Historically, tiny plantlike organisms called phytoplankton burst into bloom in the spring in the Arctic Ocean. The enormous one- to two-week bloom sets off a feeding frenzy among zooplankton, fish and bottom-dwelling creatures at the base of the Arctic food chain.

But now, because of the declining sea ice, a second bloom also appears in the fall, according to a new analysis of satellite records, published Sept. 2 in the journal Geophysical Research Letters. The fall bloom could have widespread ripple effects on marine life and the Arctic climate. Phytoplankton clear carbon dioxide from the atmosphere through photosynthesis.

Annual spring and fall phytoplankton blooms are a common feature in warmer oceans, from the cool north Atlantic to the hot, tropical Pacific. The vivid green, red and white swirls of these blooms paint the ocean like a Van Gogh sky.

Ardyna said the double Arctic blooms may herald a shift from a polar to a more temperate ecosystem.

However, the trends are so new, and varied across the Arctic, that the researchers can only speculate what the final impact will be. "For sure, the carbon cycling will change a little bit, but the question now is to understand how the rest of the plankton and fish will respond to this new pulse of phytoplankton," Ardyna told Live Science.

Ardyna and his co-authors charted phytoplankton blooms between 1998 and 2012 with satellite data that measures ocean color (a proxy for phytoplankton levels). The researchers also looked at sea ice extent and wind speeds.

The results showed that fall plankton explosions are becoming more frequent throughout the Arctic Ocean up to 80 degrees north latitude. At these high latitudes, there are no plankton blooms at all because of permanent sea ice.

The largest increases were seen in the Eastern Arctic Ocean, especially north of Russia, where ice once prevented plankton blooms. "The percentage change is really high here because this is where there used to be ice," Ardyna said. The western Arctic includes Alaska and Canada, while the eastern Arctic encompasses northern Europe and Russia.

The researchers said the plankton is likely thriving in fall for two reasons: delayed freezing and strong winds. In the fall, new sea ice starts to form when ocean temperatures fall below about 29 degrees Fahrenheit (minus 1.9 degrees Celsius). But as the Arctic sea ice shrinks, the ocean absorbs more of the sun's heat in summer, postponing the freeze until all the warmth dissipates. There were also a greater number of strong fall storms in the last decade, which can stir up nutrients to feed a phytoplankton bloom.