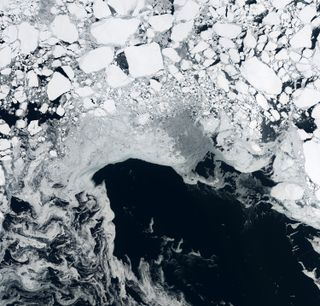 For an unprecedented third year in a row, Antarctica's sea ice is poised to smash a new record this month.

Sea-ice extent is the total ocean area in which the ice concentration is at least 15 percent, as measured by satellite.

"In the short term, it seems like there hasn't been much ice loss in the past couple of years, but I think it's still very much within the long-term trend of declining sea ice," said Axel Schweiger, chairman of the University of Washington's Polar Science Center in Seattle. "One shouldn't necessarily expect every year to be a record low."

At both poles, sea ice shrinks and expands each year with summer heat and winter cold, though in the Arctic, some ice sticks around each year. These hardy ice floes are called multiyear ice. This year, leftover ice from 2013 played a role in preventing an extreme melt, because multiyear ice is thicker and more resistant to heat than thin, young ice, the NSIDC said. Cooler-than-average sea surface temperatures in much of the region also meant more ice lasted through the summer. "The ice does appear to be quite a bit thicker this year," Schweiger told Live Science.

One region north of Siberia did experience warm seas, which combined with strong winds to open a big bite in the ice. The ice edge retreated north of the Laptev Sea to within 5 degrees latitude of the North Pole (a distance of about 310 miles, or 500 km).

What's up with Antarctica?

With the Arctic warming twice as fast as the rest of the globe, Arctic summer sea ice has declined by about 30 percent since 1979. Sea ice experts said changes wrought by global warming are responsible for both the Arctic's long-term decline and Antarctica's surprising increase. However, the link between climate change and melting ice is clearer in the Arctic than in Antarctica.

In Antarctica, some regions of sea ice are expanding, such as the Ross Sea. However, such as the Bellingshausen Sea, are shrinking. The net effect is long-term growth of about 1 percent per decade. However, Antarctica's land-based ice sheet continues to shrink, with some West Antarctica glaciers irretrievably melting, scientists reported earlier this year.

Researchers think Antarctica's recent record-high ice extents could result from stronger winds. The southern polar vortex is blowing closer to the continent as a result of the ozone hole and greenhouse gases, according to several studies. The winds help pack ice more tightly and also shift ocean currents in a manner that drives ice formation. But the most recent report from Intergovernmental Panel on Climate Change (IPCC) said that models for Antarctic sea ice trends are still "incomplete and competing."