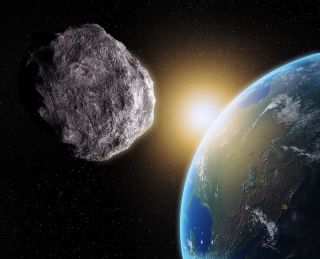 WAIMEA, Hawaii — In the 1998 movie "Armageddon," an asteroid the size of Texas threatens to collide with Earth in 18 days. To save the planet from destruction, a ragtag team of deep-sea oil drillers volunteers to divert the massive space rock by burying a nuclear bomb beneath its surface and blasting it into two pieces that will fly past Earth.

But despite its entertainment value, the film is fantastically inaccurate, said astronomer Phil Plait, who writes the "Bad Astronomy" blog on Slate.com.

"Don't go to Hollywood for advice on how to deal with an asteroid," Plait told a small but packed audience here Saturday (Sept. 13) at HawaiiCon, a science, sci-fi and fantasy convention on the Island of Hawaii. The three-day convention featured talks and events with celebrities from popular sci-fi TV series, as well as experts on space and astronomy. [Top 10 Ways to Destroy Earth]

During his talk, Plait showed a clip from "Armageddon" in which Bruce Willis' character struggles to detonate the bomb, by hand, before the asteroid smacks into Earth and destroys all life.

"There are more mistakes in that clip than video frames," Plait said. In order to blow up an asteroid the size of the one in the film, the bomb would have to explode with the same amount of energy as that produced by the sun, he said.

Even if you could make such a weapon, "it would be way more dangerous than the asteroid itself." What's more, now you don't just have an asteroid — you have a radioactive asteroid, he said.

But while real-life science in "Armageddon" fails miserably, you can find much more accurate science in the similarly plotted film "Deep Impact," also released in 1998, Plait said. In that movie, a teenage amateur astronomer discovers a 7-mile-wide (11 kilometers) comet on a path that will smash into Earth in two years.

As in "Armageddon," humanity sends a team of people to the space rock to destroy it with a nuclear weapon, but this time, the blast needed is much smaller, and the fragments produced by the explosion still end up heading for Earth. One of the pieces plunges into the Atlantic Ocean, generating a mega tsunami that floods Manhattan and many major coastlines, a scenario that is actually pretty accurate, Plait said.

But even "Deep Impact" gets some things wrong. The asteroid mission sends a spaceship to blow up the other comet chunk, producing fragments that burn up harmlessly in Earth's atmosphere instead of causing deadly impacts — not a very likely scenario, Plait said.

In real life, asteroids and comets that could hit Earth — so-called "near-Earth objects" — do pose a threat to life on the planet.

Fortunately, NASA and other organizations, such as the B612 Foundation based in Menlo Park, California, monitor the skies for these threats. Unfortunately, not all of the dangers are detectable. In fact, scientists sometimes only discover some of these nearby space rocks after the objects have already swung by and missed the planet.

Bigger telescopes are needed to detect more of these unwelcome visitors, and the earlier they can be detected, the easier it will be to deflect them, Plait said.

Editor's Note: This story was generated during a trip paid for by the Hawaii Tourism Bureau.