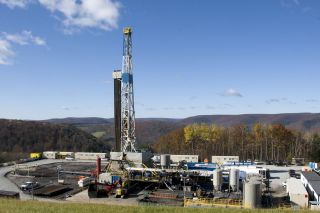 Based on geochemical forensics work, the research makes a direct link between tainted drinking water and leaky gas wells in the Marcellus Shale. The rock layer is thousands of feet below the surface, but the leaks are shallow, where cement and steel are supposed to shield water supplies from natural gas inside wells. Scientists saw the same connection in Texas, above the Barnett Shale, they report today (Sept. 15) in the journal Proceedings of the National Academy of Sciences.

"This does provide pretty strong evidence that it's a well integrity problem and not a fracking problem," said lead study author Tom Darrah, a geochemist at The Ohio State University in Columbus.

The energy industry has contested claims that fracking can contaminate water supplies. Fracking is the process of shattering deeply buried rock to release trapped natural gas. Oil and gas companies have claimed that drinking water pollution may be caused by methane gas slowly bubbling up naturally through cracks in rock layers. Other groups have debated whether the methane came from fracking, horizontal drilling or leaking wells. [In Photos: The World's 9 Most Polluted Places]

In the study, researchers traced methane gas in more than 130 Pennsylvania and Texas water wells to poorly sealed, cracked or failing fracking wells. Several layers of cement and steel typically protect shallow underground water supplies from gas and fluids pulsing through fracking wells. The thickest layers are at the top, to create a buffer between the well and groundwater. The wells narrow with depth, similar in shape to a telescope.

Both the cement and steel casings can fail because of damage during installation, corrosion, design flaws or age — known as "well integrity problems." Methane gas will escape through any openings.

"There's actually a little bit of good news," Darrah told Live Science. "If we improve well integrity, we can eliminate a lot of the environmental problems that have surrounded fracking so far," he said.

About 6 percent of Pennsylvania's fracking wells have documented well leaks, according to a June 30, 2014, study by engineering professor Anthony Ingraffea of Cornell University in Ithaca, New York. Up to 100,000 new fracking wells could be drilled in Pennsylvania in the next few decades.

But methane isn't the only contaminant in drinking water wells near natural gas fracking sites. Dangerous levels of arsenic and barium have also been found. Salty natural brines from deep rock layers are also migrating upward toward the surface. An Environmental Protection Agency review of nationwide well safety and fracking's effects on water supplies is due this year.

The boom in fracking (or hydraulic fracturing) has boosted U.S. natural-gas production by 30 percent in the past decade. The drilling has also sparked an increase in moderate earthquakes in states such as Oklahoma, Arkansas and New Mexico, as well as fears of widespread environmental contamination. Leaking wells also emit methane into the atmosphere, where the greenhouse gas is about 34 times more efficient at trapping infrared radiation (the greenhouse effect) than carbon dioxide, though methane breaks down much more quickly than CO2.

Darrah said multiple lines of evidence confirm the methane leaks come from the Marcellus and Barnett shales, or from shallower methane pockets in overlying rocks. Carbon isotopes revealed the methane was created by heat and pressure, not from microbes in groundwater. (Isotopes are versions of the same element with different numbers of neutrons in their nuclei.)

Trace amounts of noble gases helped determine how fast the gas bubbled into drinking water supplies. Naturally rising methane should have about 10,000 times more helium than the gas polluting the drinking water wells, Darrah said. But the helium, neon and argon suggest the methane zipped to the surface via a fracking well, and then leaked out into groundwater.

"Somehow, these gases managed to get to the surface without going through any water or rock, and in some cases, we could actually document well integrity was the problem," Darrah said.