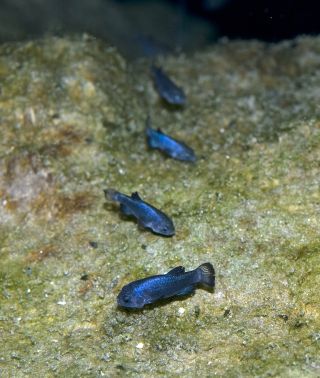 An inch-long fish that sparked a Supreme Court battle could go extinct in less than 30 years, a new modeling study concludes.

Kept under lock and key, the Devils Hole pupfish (Cyprinodon diabolis) has teetered on the brink of extinction since it made the federal list of endangered species in 1967. Now, with fewer than 100 fish left, federal officials must carefully weigh the impacts of any conservation efforts, including a new captive breeding program.

In 2013, the U.S. Fish and Wildlife Service (USFWS) opened a $4.5 million "ark" in Nevada for the Devils Hole pupfish. The Ash Meadows facility precisely mimics the hot (93 degrees Fahrenheit, or 34 degrees Celsius), mineral-laden waters inside the fenced-in cavern where the animal lives in the wild. In April, biologists announced that Ash Meadows pupfish had laid eggs in captivity for the first time. All previous attempts to raise captive pupfish populations have eventually failed, however.

Even with the initial success at Ash Meadows, wildlife officials continue to collect fish eggs from the original dwellers in Devils Hole cavern. This poses a risk to the shrinking pupfish population, however. To reduce the impact of the egg collection, biologists should gather pupfish eggs in the fall, when the fish population is larger, rather than in the spring, according to the new study, for which a scientist analyzed the extinction risks for the pupfish. [In Images: 100 Most Threatened Species]

The pupfish spawn year round, but the best hatching period lasts only 10 weeks. Currently, eggs are harvested on artificial spawning beds, in the times of the year when hatchlings rarely survive, according to USFWS.

The iridescent blue fish are the remnants of a pupfish population that lived in the vast ice-age lake that filled Death Valley thousands of years ago. When the lake shrank, isolated pupfish groups persisted in rivers and ponds, becoming separate species.

The Devils Hole pupfish became trapped in Devils Hole, a limestone cavern in Nevada fed by geothermally heated groundwater. If the cavern's water level drops too far, the fish can't lay eggs on their favorite shallow water ledge. Thanks to a long legal battle, the fish hold water rights to protect their spawning ledge.

Well-intended conservation efforts have sometimes hurt the fish, rather than helped, however. For example, in 2004, a flash flood knocked larval traps off the spawning ledge into the bathtub-like cavern, trapping and killing 72 fish.

More recently, pupfish experts have discussed moving the entire population to the Ash Meadows ark, sometimes called the fish's "condor moment." The last wild American condors were taken into captivity in 1987, when their population dwindled to 22 individuals. The species now numbers more than 400 birds, but survives only through the help of captive breeding.

The Devils Hole pupfish will also face a severe extinction threat if the cavern population drops below 30 individuals, according to the new study, published today (Sept. 9) in the journal PeerJ. A population survey in Sept. 2013 found 35 pupfish, the lowest number for the fall season in 40 years. This spring, there were 92 pupfish.

"The need to establish a secure population outside Devils Hole is greater than ever if this species is to persist," wrote study author Steven Beissinger, a UC Berkeley professor of environmental science, policy and management.

The pupfish faces a 28 to 32 percent risk, depending on the season, of going extinct in the next 30 years, but the species could disappear in as little as seven years, Beissinger finds.

"The study really puts out more empirically the risk of extinction for this fish," Kevin Wilson, an aquatic ecologist at Death Valley National Park who is working on the recovery of the pupfish, said in a statement. "These findings are providing us with very good tools for our toolbox," said Wilson, who was not involved in the research.

And the pupfish could bounce back much faster than condors did, Beissinger wrote. The fish has a one-year lifespan and reproduces quickly, though with such a low breeding population, low genetic diversity is a concern.

"Somehow, this handsome little fish has heroically persisted in the harsh desert environment through thousands of years of drastic climate warming and droughts," Beissinger said in a statement. "[I]t is not too late to rescue the Devils Hole pupfish from extinction."