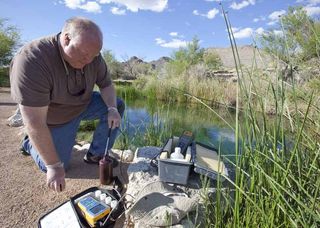 About 10,000 gallons of water per minute gush up from the desert floor at an oasis near Death Valley, Nevada, but only after the water completes a slow 15,000-year underground journey, a new study suggests.

Until now, scientists were puzzled over the source of water for the oasis called Ash Meadows in Nevada. The new research suggests the water flows from the north to the south through an underground crack in the Earth's crust known as the Gravity Fault, which acts as a guide for the water. That conduit connects the Nevada Test Site with Ash Meadows, which is located about 90 miles (145 kilometers) northwest of Las Vegas.

"Since the crust in Western states is being pulled apart east to west, it creates north-south fault lines such as this one that guides groundwater from one geographically closed basin to another," said Stephen Nelson, a geologist at Brigham Young University in Utah.

That underground connection with the Nevada Test Site could spell trouble for the desert paradise in the future, because of radioactive water contaminated by nuclear testing. But the radionuclide-laden waters likely won't reach the oasis for thousands of years.

The water bubbling up at Ash Meadows every minute, has temperatures ranging from 86 to 95 degrees F (30 to 35 degrees C). That suggests the water comes from at least one third of a mile (half a kilometer) below the surface, when taking into account the ambient air temperatures and cooling of the water on the way up.

The water also must cross an average of 31 to 37 miles (50-60 km) between the Nevada Test Site and Ash Meadows, Nelson said. He added that the flow of water has slowed due to the current dry conditions, but could speed up sometime in the future during a colder and wetter period.

Geologists originally thought that Ash Meadows water came from Spring Mountains. But the water would have had to flow west and southwest across geographical barriers such as fault lines running north-south.

Nelson and his colleagues sifted through more than 4,000 published water samples in the region, and narrowed the pool down to 246 distinct groundwater sources. They then compared the chemical fingerprints of those sources against that of the water from Ash Meadows.

Only the Nevada Test Site's water had a matching profile of dissolved minerals, as well as comparable ratios of hydrogen and oxygen isotopes, which are atoms with different numbers of neutrons. The isotopic ratios served as additional chemical fingerprints that proved the connection between the Nevada Test Site and Ash Meadows.

The U.S. government set off many nuclear bombs at the Nevada Test Site over the course of four decades. That included perhaps 800 below-ground nuclear tests that dumped some radioactive materials into the water aquifer that feeds Ash Meadows.

"That's going to come out eventually, but if the water in Ash Meadows has been in the ground for 15,000 years, it's not going to be anytime soon – unless the climate gets wetter and flushes the system out," Nelson told LiveScience.

Nowhere else in the world

For now, Ash Meadows represents a liquid bounty in the desert that has become a home for 24 unique animal and plant species found nowhere else in the world.

Among those species is the highly endangered Devils Hole pupfish, an iridescent blue inch-long fish that has made its home in what amounts to a vertical cave filled with water. The fish population numbered barely 120 this spring before spawning season, but has been on the rebound since a disaster with some fish traps several years ago.

The study is detailed in the May 28 issue of The Journal of Hydrology.