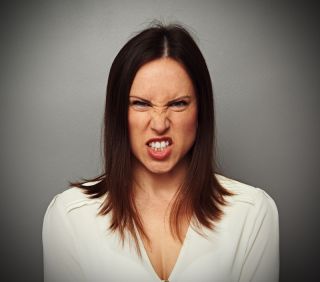 If you see someone with a furrowed brow, pursed lips and flared nostrils, it's easy to tell they're angry.

In fact, humans evolved a universally recognizable angry face not only to warn others of impending aggression, but also to help resolve conflicts faster, new research suggests.

Each of the seven facial muscle groups involved in creating an angry expression contract in a way that makes an angry person look physically stronger to other people, compared to the same face without the muscle contractions, the study showed. [Fight, Fight, Fight: The History of Human Aggression]

Still, the researchers on the new study pointed to previous research suggesting that anger evolved in humans to encourage more effective bargaining and compromise.

"Even blind children make the same face without ever seeing the expression," said Aaron Sell, lead author of the study and a lecturer at the School of Criminology at Griffith University in Australia.

And other animals have similar ways of displaying anger and aggression, Sell said. For example, baboons show their fangs to rivals. The longer the fangs are, the more potential damage a baboon can do, and the more likely the opponent is to back off, he said.

"But humans don't fight with their faces," Sell said, so the researchers wanted to find out why this kind of facial expression evolved.

In the study, Sell and his colleagues looked at whether an angry facial expression might emphasize a person's strength and, in turn, make the angry individual look more intimidating and capable of inflicting harm.

The researchers used a computer-generated image of a man's face, and warped the features. For the first test, the team created one photo of the face with a lowered brow, which is one characteristic of an angry face, and another photo with a raised brow, and asked the 141 study participants to judge which face appeared physically stronger.

They found that the brow change did not make either face appear "angry" to others, but people who looked at the photos reported that the image with the lower brow looked like it belonged to a physically stronger man.

The researchers followed the same steps for each of the other characteristics of an angry expression, including raised cheekbones (as in a snarl), thinned lips, a raised mouth, flared nostrils and a chin that is pushed up and out. They found that when they added even just one of these features to the computer-generated faces, the study participants reported that the face looked physically stronger.

"Anger is triggered by the refusal to accept the situation, and the face immediately organizes itself to advertise to the other party the costs of not making the situation more acceptable," John Tooby, co-director of the University of California, Santa Barbara Center for Evolutionary Psychology, who also worked on the paper, said in a statement. The study shows that "no feature of the anger face appears to be arbitrary; they all deliver the same message," he said.

Sell said future research is needed to explore why these specific muscle groups make up an angry expression.

The study is published in the September issue of the journal Evolution & Human Behavior.