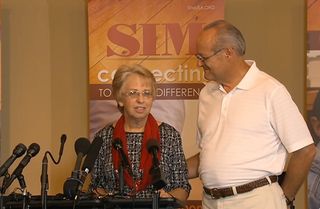 Ebola survivor Nancy Writebol and her husband held a news conference on September 3 about their battle with the deadly disease.
(Image: © NBC News)

When Nancy Writebol, an American missionary working in West Africa, learned she had contracted the Ebola virus, she thought, "It's going to be OK."

The 59-year-old shared details of her fight against the deadly disease for the first time in a news conference today (Sept. 3) at the SIM USA charity in Charlotte, North Carolina.

"I just want to express first of all my appreciation to the lord for his grace, for his mercy, and for his saving of my life," Writebol said.

"There were many mornings I woke up and thought, 'I'm alive!'" Writebol said. "And there were many times when I thought 'I don't think I'm going to make it anymore.'"

Writebol and another American health-care worker, Dr. Kent Brantly, contracted Ebola last month while caring for patients in Liberia, one of the countries affected by the current Ebola outbreak. Writebol and Brantly were both flown to the United States and continued to receive medical care in an isolation unit at Emory University Hospital in Atlanta. Both recovered from the disease and left the hospital about two weeks ago. [Ebola Virus: 5 Things You Should Know]

Writebol said she is grateful to the doctors in Liberia and in the United States, for her family, and for all the prayers.

"This is not our story, this is God's story. God is writing this," Writebol said.

"It's been a challenge, but we are humbled that God would choose us to tell that story," Writebol's husband, David, said.

Since it started in Guinea in February, the Ebola outbreak has spread to several countries, infecting about 3,000 people. At least 1,500 people have died during the outbreak, according to the World Health Organization.

Yesterday (Sept. 2), SIM USA announced that another one of its missionary workers, Dr. Rick Sacra, had been infected with Ebola in West Africa. Sacra had been working with pregnant women at SIM's ELWA hospital in Monrovia, Liberia, and it's unclear how he contracted the virus.

Ebola is transmitted through contact with blood and bodily fluids of an infected person and is not spread through casual contact. Health-care workers treating Ebola patients use protective suits to avoid contact with the virus.

Writebol and her husband went to Liberia for missionary work last year, and enjoyed serving there. "It was a joy to be there, every single day was new," Writebol said.

During the outbreak, Writebol's duties involved helping doctors put on their protective gear and disinfecting them as they exited isolation areas. Both Writebol and Brantly believe they had followed all precautionary guidelines and don't know how they contracted the virus.

One day Writebol started to feel ill, but she thought she had malaria, an illness she had experienced in the past year. She also tested positive for malaria and started malaria medication. But as she wasn't get any better, doctors also ran an Ebola test, "just to set everybody's mind at ease," she said.

The test was positive, and Writebol's husband had to deliver the news to her.

"I said, 'David, It's going to be OK,'" Writebol said. "I went to the front door and our doctors were standing there and their comments were, 'Nancy, we are so sorry.'"

Both Writebol and Brantly received an experimental drug, ZMapp, but it is difficult to know how much the drug helped with their recovery, because they were the first-ever patients to receive it.

"I'm often asked what saved me," Writebol said. "Was it the ZMapp, was it the supportive care? Was it the Liberian or U.S. medical people? Or was it your faith? And my answer to that question is all of the above."

The Writebols are now going to take some time for rest and recuperation, they said. "We want to see our children and our grandchildren, and we are looking forward to what God has for us in our next mission."