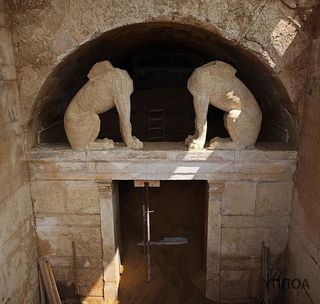 As archaeologists continue to clear dirt and stone slabs from the entrance of a huge tomb in Greece, excitement is building over what excavators may find inside.

The monumental burial complex — which dates back to the fourth century B.C., during the era of Alexander the Great — is enclosed by a marble wall that runs 1,600 feet (490 meters) around the perimeter. It has been quietly revealed over the last two years, during excavations at the Kasta Hill site in ancient Amphipolis in the Macedonian region of Greece.

Excavators recently unearthed the grand arched entrance to the tomb, guarded by two broken but intricately carved sphinxes. Earlier this month, Greek Prime Minister Antonis Samaras toured the site. He later told reporters he was standing in front of an "extremely important discovery." [See Photos of the Excavation's Progress]

Since then, tourists and TV crews have reportedly flocked to the heavily guarded site. According to the Athens News Agency (ANA), a record number of visitors came to the nearby Amphipolis Museum last weekend for a chance to get a glimpse of the excavations, some of them using telescopes. But the archaeologists working on the site have urged patience. They've denied rumors that they've already found three graves and that the tomb is intact.

"The excavation will show if the tomb has been looted or not," Katerina Peristeri, the lead archaeologist on the Kasta Hill project, said in a statement from the Greek Ministry of Culture. "We are like surgeons," Peristeri told ANA. "We proceed very slowly. The excavation will show us what lies behind the wall," she added, while archaeologist Michalis Lefantzis told ANA last week that "news will be coming very soon."

In the latest updates from the Ministry of Culture, photos show that red and black paint is still intact on the architrave, or doorway, leading into the tomb. (The heads of the two sphinxes, however, have yet to be found.) The excavators also discovered frescoes imitating marble and a diamond-patterned mosaic.

The excavators have said they believe the tomb was created by Dinocrates, an architect and adviser to Alexander the Great, who is best known for building Alexandria. It's not yet clear who was buried in the tomb, but Alexander isn't on the short list of possibilities. (He died in Babylon, and all historical accounts indicate he was buried in Alexandria, Egypt, though his grave has never been found.) Michalis Tiverios, an archaeology professor at the Aristotle University of Thessaloniki, told AFP a more likely candidate could be Nearchus, one of Alexander's admirals, who lived in Amphipolis.