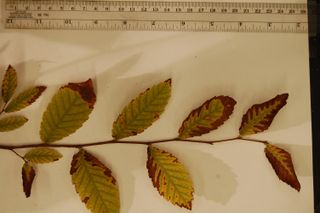 A winged elm damaged by exposure to explosive chemicals.
(Image: © Stephen Via)

SACRAMENTO, Calif. — Wars may end, but land mines last for decades. These deadly explosives can be cleared, but the task is often dangerous and time-consuming.

Someday, there may be an easier way: Plants could indicate where mines lay hidden underground, according to researchers at Virginia Commonwealth University (VCU) in Richmond, Virginia.

The VCU researchers are developing methods to identify plant damage caused by leaking land-mine explosives, such as TNT and RDX (an explosive used in the military). The team hopes to devise low-cost techniques for detecting this damage either from the air or on the ground, such as with a sensor hooked up to a cellphone. [The 10 Greatest Explosions Ever]

"Imagine if you could hold up your phone and look at a plant, and it's green [for safe] or it's red [for danger]. Imagine the humanitarian value," said Don Young, a VCU plant physiologist and senior investigator on the project.

The approach could be especially useful in areas where heavy plant cover hides mines from traditional detection methods, such as in Eastern Europe, sub-Saharan Africa and Southeast Asia, Young said.

The work started several years ago, with a grant from the U.S. Army to search for new ways to detect buried explosives. The team started with stressed plants, because plants absorb chemicals from the soils in which they grow. Vegetation above buried, leaking explosives could potentially show signs of contamination, such as visible brown spots and curled leaves. Land mines leak small amounts of chemical explosives over time, and the mines last for several decades, creating a deadly toxic legacy.

But it turns out that some plants are more susceptible to the chemicals than others. For example, in laboratory tests, the common weed nutsedge simply ignored TNT and RDX, said Stephen Via, a VCU graduate student. However, winged elm, a small tree, responded to the chemicals as if treated with an herbicide, he said.

If TNT and RDX kill off only some plants within an ecosystem, then the shift in species might be detectable by remote sensing with instruments mounted to planes or satellites. Via is now searching for evidence of such selective die-offs at a privately owned experimental minefield in South Carolina, where the U.S. Defense Advanced Research Projects Agency (DARPA) once buried fake land mines for a research project.

The minefield was divided into control sites (with no chemicals), sites with TNT mines, sites with RDX mines and sites with mixed chemicals.

When any of the explosives were in the soil, herbaceous plants (those with soft, green stems) were more likely to vanish compared with woody plants, Via reported on Aug. 12 here at the Ecological Society of America's annual meeting.

TNT and RDX contaminate 2,000 sites in the United States, Via said. Such changes in plant ecosystems could be an overlooked effect of explosive contamination.

"This is a significant impact, and it's all over the world," Via said. "I think more work needs to be done in this area."

In a separate project, the VCU team is now looking at data from remote-sensing flights over the DARPA minefield. They want to see if they can detect the explosives from changes in plants, said Julie Zinnert, a VCU research scientist and project co-investigator.

Stressed plants also change in ways the human eye can't see. The damage shows up in the infrared, and can be detected with hyperspectral imaging, which divides light into bands outside the visible light spectrum.

But searching for the spectral fingerprint of explosive contamination means first identifying how explosives change the reflectance of plants. Via and VCU graduate student Paul Manley have preliminary results that suggest some species will be better indicators of buried land mines than other plants.

In the future, Manley said, he hopes there will be an Explosive Specific Index for plants, essentially a spectral catalog of how land mine contamination affects plants. If publicly available and combined with a low-cost spectral imaging sensor, the index could lead to a phone app for use in mine-laced regions.

In 2012, land mines killed 3,268 people, 47 percent of them children, according to the International Campaign to Ban Land Mines. More than 60 countries are known to have land mines, or suspected to be contaminated by land mines, the group reports.