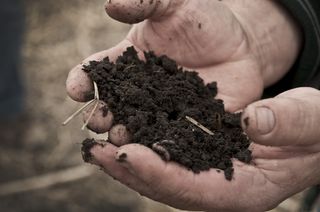 Peter Lehner is executive director of the Natural Resources Defense Council (NRDC). This piece is adapted from a post to the NRDC blog Switchboard. Lehner contributed this article to LiveScience's Expert Voices: Op-Ed & Insights.

At Brown's Ranch, just east of Bismarck, N.D., the community has gone 70 days with less than half an inch of rain. Yet Gabe Brown, the owner of this 5,400-acre farming and ranching operation, is looking out on a deep green field of sunflower, vetch, corn, clover, buckwheat, savannah grass and other crops.

"It's not how much rainfall you get," explains Brown. "It's how much you can store."

The soil on Brown's land, thanks to some innovative, soil-enhancing farming techniques, holds about three times as much water as a conventional farm. This makes his farm more able to withstand hot, dry weather or soak up heavy rainfall. This means less water is wasted — and it also means that Brown, who received a 2012 Growing Green award from NRDC, doesn't need to rely on federal crop insurance to cover his losses in times of drought or other weather extremes. All the insurance he needs is in his soil.

The vast majority of American farms do rely on federal crop insurance — so heavily that it's become the nation's most expensive farm subsidy. In 2012, the Federal Crop Insurance Program (FCIP) paid $17.3 billion in indemnity payments to farmers, largely due to the widespread drought that year. That came on the heels of another tough year for farmers, when massive flooding along the Mississippi led to payouts of nearly than $11 billion.

Taxpayers foot most of the bill for the FCIP. It's yet another way in which we all pay the costs of climate change, which is driving more droughts, flooding and extreme weather. As our climate warms, crop insurance claims from farmers will continue to rise, according to the USDA, placing an even bigger burden on the FCIP, and therefore, taxpayers. [Another 1930s Dust Bowl Drought Possible This Century (Op-Ed)]

The irony is that the FCIP actually rewards the kind of farming that makes land less resilient in the face of drought and other weather extremes — and more likely to rely on crop insurance.

In a new NRDC report, my colleague Claire O'Connor, who comes from a long line of Nebraska farmers herself, calls for an overhaul of the FCIP. O'Connor, an agricultural water policy analyst, says the FCIP should be reformed to encourage risk-reducing farming techniques, like those championed by Gabe Brown, which improve soil health and reduce the risk of crop loss.

We weather-proof our homes; it makes sense to climate-proof our farms.

Brown is among a growing number of farmers who use a suite of techniques to build soil's natural capacity to retain moisture, discourage weeds and pests, and nurture crops. When Brown launched his operation in 1991, his soil was gray, dull and lifeless. Over the decades, it's become rich, nearly black, and it teems with earthworms, beneficial insects and microorganisms. The change is due to several key farming practices, including cover cropping and no-till farming, which improve soil health.

No-till farming means that instead of plowing-under that rich soil ecosystem every planting season, Brown plants directly onto the stubble of last year's crops. The stubble acts like mulch and helps the soil retain moisture. According to USDA data, farmers who used no-till methods on corn in 2010 were 30 percent less likely to receive an indemnity payment from the FCIP than conventional farmers. No-till farming, according to NRDC's analysis, could have potentially saved the FCIP $223 million in payouts in 2010 alone.

Cover cropping — as Brown's deep-green cover-cropped fields demonstrate — helps build healthier soil. Cover crops aren't grown for market. They're chosen for their ability to protect and enhance soil health. Planting a mix of cover crops, like winter wheat and hairy vetch, increases soil nutrients and water retention, and prepares the soil for the next planting rather than depleting it. A recent USDA survey found that farmers who used cover crops in 2012 averaged higher yields than farmers who did not. The benefit was most pronounced in areas hardest hit by drought, demonstrating what a powerful drought-proofing tool cover-cropping can be. [Dealing with Drought: Reaping the Benefits of Cover Crops (Op-Ed)]

Using techniques that protect and improve soil health provides a built-in buffer against weather extremes, and makes farming a considerably less-risky business. But the FCIP offers farmers absolutely no incentive to use those strategies. Instead, it encourages profits for risky planting — such as repeatedly planting corn, or growing crops on marginal land that requires heavy use of chemical fertilizers — that depletes soil health.

The nation can't afford to put our farmland, or our farmers — not to mention taxpayers — at risk by not protecting farms from extreme weather. Farming is hard enough. Why make it harder?

I help manage a coffee farm, and our yields, as well as world prices, can vary as much as 30 percent or more from year to year. Few other businesses need to confront such variability, and frankly, it is hard to do so. So let's encourage techniques that help rather than hurt.

NRDC has been working with farmers for decades to help promote sustainable farming techniques, and to develop tools and policies that help make our agricultural industry healthier and more sustainable over the long term. The FCIP can help farmers transition to less risky farming by becoming a true risk-management policy, instead of a crutch. The program should (and can, according to existing law) offer lower rates to farmers who embrace low-risk, water-smart practices, like cover cropping, no-till farming and more efficient irrigation. Reforming the FCIP to encourage soil-protective, climate-proofing techniques will make our farms more resilient and our farmers more secure, ease the burden on taxpayers and protect our environment.

You can learn more about soils and soil health in these videos. Lehner's most recent Op-Ed was Now Hiring: 210,000 Workers to Cut Carbon Pollution. The views expressed are those of the author and do not necessarily reflect the views of the publisher. This article was originally published on LiveScience.