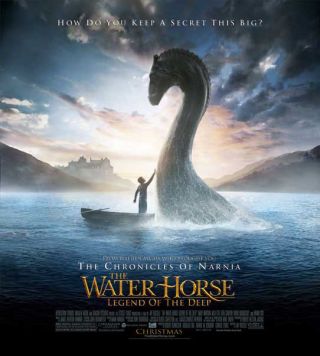 Art from the movie "The Water Horse: Legend of the Deep."
(Image: © Sony Pictures)

The Loch Ness monster is almost here — on the silver screen, anyway.

On Christmas, a new family film about the alleged, elusive beastie will hit theaters: "The Water Horse: Legend of the Deep."

"Water Horse," which opens Dec. 25, isn't Nessie's first film, of course; he (or she—nobody's gotten close enough to look) also appeared in "Loch Ness," a 1996 Ted Danson vehicle; at least one Scooby Doo adventure; and, perhaps best of all, in the 2004 pseudodocumentary "Incident at Loch Ness."

Stories and legends about "water horses" have been told in the Scottish highlands for centuries, though there's no clear link to the Loch Ness monster. According to George Eberhart's book "Mysterious Creatures," water horses are native to the British Isles and Europe. They sometimes graze with normal horses, but if anyone is foolish enough to try and mount a water horse, it will immediately gallop to a nearby lake or river, drown its rider, then eat the hapless person's flesh.

One type of water horse, the Kelpie, is also said to chase down young Scottish women and take sexual liberties with them; I suspect these parts of the water horse's legend will not be explored in the family film.

Some claim that sightings of the Loch Ness creature date back to 565, when a story about St. Columba relates that he commanded a "ferocious monster" to stop attacking a man along the Ness river. Because the account is clearly the stuff of legend — and because there are no other accounts of similar monster attacks — this is hardly good evidence. In fact, the British Isles have long been claimed, often with a wink, to be populated by plenty of mythical creatures , including elves and fairies.

If there is a monster in Loch Ness, it seems to have appeared both suddenly and rather recently.

The earliest reliable account of the Loch Ness monster dates back only to May 1933, when a local newspaper reported a story that an anonymous couple along the loch's shores spotted an unusual disturbance in the water. The couple did not claim to have seen Nessie; instead others later assumed it must have been the creature and count it as a monster sighting.

In May 2007, a man named Gordon Holmes videotaped a disturbance in the loch that he believed may be the monster. Yet, like virtually every other alleged lake monster video, it could be any number of known things including an otter, a fish, or a wave.

While it is possible that a giant, unknown creature exists in Loch Ness (even one as cute as the film's animated water horse), there's no hard evidence that they do. Loch Ness has been searched for over seventy years, using everything from miniature submarines to divers and underwater cameras. The results have been disappointing: no teeth, bones, or monsters, alive or dead.

Benjamin Radford is LiveScience's Bad Science columnist. He has visited and conducted experiments at Loch Ness for his book "Lake Monster Mysteries: Investigating the World's Most Elusive Creatures." This and his other books can be found on his website.