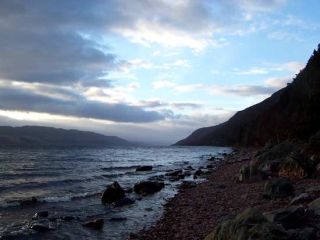 COMMENTARY The Loch Ness monster has reputedly been captured—again (at least on film). In late May, a man named Gordon Holmes videotaped what he claims may be the famous creature. Holmes described it as jet black and about forty-five feet in length, yet the video shows neither the creature's color nor its size; it is simply something moving in the water, leaving a typical long wake. Size and distance are notoriously difficult to estimate on lakes unless there are objects nearby of known size such as a boat or buoy. While Holmes's video is making international news, it is just the latest of many. There is no shortage of videotape of “mysterious things" moving in the world's lakes. The problem is that often these could be nearly anything, and most likely are natural phenomenon or known creatures. There are many fish and fauna around Loch Ness that could look easily create the image Holmes taped. The only reason anyone is claiming the video may be of a monster is because it was shot at Loch Ness; on any other lake the object would be assumed (probably correctly) to be a normal animal. It is likely that Holmes (like many tourists around Loch Ness) was hoping and expecting to see the creature, and thus interpreted what he saw as the monster. As researcher Loren Coleman noted on Cryptomundo, a Web site devoted to mysterious creatures, Gordon Holmes's credibility is not exactly crystalline: He has a history of claiming to see odd and unusual creatures, and he sells a self-published book and DVD featuring what he claims is evidence for the existence of fairies. A monster in Loch Ness, or any other lake, is a possibility, but a very remote one, given the fact that there is no hard evidence that they exist. No such creatures have ever been captured. If they exist (and there would have to be dozens of them in each lake to sustain a breeding population), they have miraculously managed to avoid leaving any teeth, bones, or carcasses. Loch Ness has been repeatedly searched for over seventy years, using everything from miniature submarines to divers and underwater cameras. In 2003, a team from the BBC scoured the lake using 600 separate sonar beams and satellite navigation; they turned up no monsters. It seems that the world will continue to wait for solid evidence of Nessie. Benjamin Radford has investigated lake monster sightings and video footage for Skeptical Inquirer magazine and National Geographic Television. He has conducted field research at Loch Ness looking for its reputed denizen, and is co-author of "Lake Monster Mysteries: Investigating the World's Most Elusive Creatures." This and other books are noted on his website.