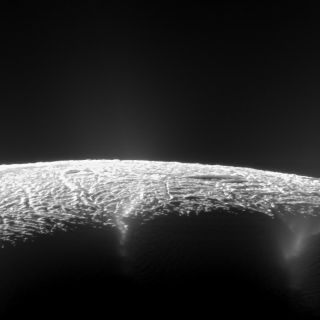 This view from NASA's Cassini spacecraft looks across the geyser basin near the south pole of Saturn's moon Enceladus. Plumes of water vapor and ice might erupting from cracks in Enceladus' surface could offer clues about the moon's subsurface ocean, thought to be a good candidate in the search for extraterrestrial life.
(Image: © NASA/JPL-Caltech/SSI)

Of all the places scientists expected to find life on Earth, a Caribbean lake of bubbling black asphalt was likely not high on the list.

But on Aug. 7, researchers reported in the journal Science that oil doesn't necessarily choke out all life; microbes were found living in miniscule droplets of water in Trinidad's tar-filled Pitch Lake.

This earthly discovery could actually be a boon to the search for life on other planets with extreme environments once thought to be too hostile to support living organisms. Here's a look at a few places in our own solar system that may harbor alien life:

The discovery of life in Trinidad's Pitch Lake should be most exciting to researchers looking for signs of life on Titan, Saturn's largest moon. Titan resembles Earth perhaps more closely than any other celestial body in the solar system. But instead of water oceans, this frigid moon is home to vast hydrocarbon lakes.

The authors of the new study in Science say there could be droplets of water-ammonia mixtures rising inside Titan's oily lakes, much like the water droplets found in Pitch Lake. Further study of how life can survive in water trapped in oil "would give us better ideas how organisms on Titan, if they exist, could adapt to live in those hydrocarbons," study co-author Dirk Schulze-Makuch, an astrobiologist at Washington State University in Pullman, told Live Science.

In the late 19th and early 20th centuries, astronomer Percival Lowell popularized the idea that "canals" on the Red Planet were the work of intelligent Martians. Those apparent channels turned out to be a spectacular illusion. Images from NASA's Mariner and Viking missions in the 1960s and 1970s revealed a desolate landscape with no trace of civilization analogous to humankind on Earth. [7 Huge Misconceptions about Aliens]

Scientists don't have any evidence yet that life ever existed on Mars, but they do know that Mars has water ice covering its poles and that Martian surface soil contains 2 percent water by weight. (All forms of terrestrial life need water, which is why scientists have been focused on finding it on Mars and elsewhere in the solar system.) What's more, dirt samples studied by NASA's Mars rover Curiosity — which just celebrated its two-year anniversary on the Red Planet — have revealed that Mars would have at least been capable of supporting microbial life billions of years ago, when the planet was much wetter and warmer than it is today.

If water is the key to life as we know it, then Europa might be the most promising candidate in the search for alien organisms. This moon of Jupiter is thought to harbor a huge ocean of liquid water beneath its thick icy crust. In recent years, scientists have discovered microbial life in extreme ocean environments on Earth, which hint that strange life forms could exist in a place like Europa. Filmmaker James Cameron's 2012 expedition to the deepest pit in the ocean turned up 68 new species of bacteria. Last year, scientists found microbial life in an Antarctic lake buried deep beneath the ice sheet.

The Obama administration's 2015 budget request set aside $15 million to help develop a mission to Europa. NASA researchers have been developing a probe, dubbed the Europa Clipper, to make multiple flybys around the moon, studying plumes of water vapor bursting from Europa's south pole. Just last month, the space agency put out a call for ideas for scientific instruments that could detect signs of life on a future mission to Europa.

Like Europa, Saturn's moon Enceladus has a formidable frozen shell covering a deep subsurface ocean, which could cover an area at least as big as Lake Superior, according to a recent study in the journal Science. Some researchers think they may be able to study Enceladus' hidden water without drilling through its crust, which could be up to 25 miles (40 kilometers) thick. NASA's Cassini spacecraft has spotted 101 geysers of water vapor and ice erupting from fractures near Enceladus' south pole, scientists announced last month. If these plumes come from Enceladus' buried ocean, future spacecraft that fly through these geysers could study the makeup of the moon's ocean without actually landing on the surface.