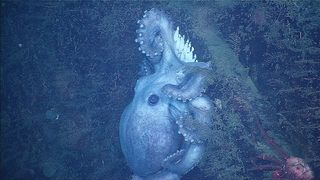 For 53 months, scientists watched as a female octopus in the deep sea vigilantly shielded a single clutch of eggs. An underwater camera took this image in May 2007, soon after "Octomom" laid her eggs.
(Image: © © 2007 MBARI)

A real-life "Octomom" off the coast of California has been declared a champion of parenting — and patience — in the animal world.

After the deep-sea creature laid a clutch of eggs, she protected her babies until they hatched 4.5 years later, without even leaving to eat. Not only is that four times longer than most shallow-water octopuses even live, but it's also the longest brooding period known of any animal on the planet, elephants and emperor penguins included, according to a new study.

The findings, detailed today (July 30) in the journal PLOS ONE, suggest octopuses far below the surface might live much longer than their shore-hugging cousins. The case of extreme parenting also illustrates how some animals have evolved grueling strategies to ensure their offspring survive in such a hostile environment as the deep ocean. [See Photos of 'Octomom' Shielding Her Eggs]

Scientists were first introduced to the long-suffering octopus in April 2007 during a spontaneous dive with a remotely operated vehicle, or ROV, in a deep underwater valley known as the Monterey Submarine Canyon.

Bruce Robison, a senior scientist at the Monterey Bay Aquarium Research Institute (MBARI), and his colleagues had been using the ROV to spy on squid, fishes and jellies that live closer to the surface.

"On a lark one day, we said let's go to the bottom and see what's there," Robison said.

They steered the camera-equipped vessel down to a rocky outcrop 4,583 feet (1,397 meters) below the surface, where temperatures hover around 37 degrees Fahrenheit (3 degrees Celsius). There, the team encountered a single female octopus of the species Graneledone boreopacifica. They went back to the site 38 days later and saw the same octopus, this time guarding a clutch of eggs fixed to a near-vertical face of the ledge.

"She had very characteristic scars on some of her arms," Robison told Live Science. "We just called her Octomom."

Though the deep sea was generally out of their realm of scientific study, Robison and his colleagues seized on the opportunity to watch this elusive species brood from beginning to end. They didn't expect they'd be watching Octomom for more than four years.

In more than a dozen subsequent dives with the ROV, the team never saw Octomom leave her eggs. She always had her eight arms curled over her clutch of about 160 eggs, though occasionally, she did smack away crustaceans that got too close. While the developing octopuses were subsisting on a big yolk inside their eggs, the scientists never saw Octomom eat. She even resisted the temptation of crabmeat offered to her with the ROV's robotic arm.

Octopuses  — which have just one clutch of eggs in their lifetime — are typically believed to stop eating altogether, or eat very little, when brooding. But Octomom's perseverance was extreme. Watching the eggs took a toll on Octomom's body, and for a cephalopod, she looked old. Her mantle shrank, her eyes got cloudy and her skin sagged and faded in color.

"She was really slowed down," Robison said. "At those very cold temperatures, her metabolic rate was very slow. She wasn't burning energy until she had to protect the eggs or keep them clean." [8 Crazy Facts About Octopuses]

The last time Robison and his colleagues saw Octomom was September 2011. By October 2011, she was gone. Her egg capsules were left in tatters, a half dozen young octopuses floated nearby, suggesting a successful hatch, after which Octomom likely died.

"This is really surprising, and I've been studying octopuses for over 20 years," said Janet Voight, Associate Curator of Zoology at the Field Museum in Chicago, who was not involved in the study but reviewed it. "The photos to me — skeptic that I am as a scientist — support that it is the same individual."

For comparison, the previous eight-armed record-holder for brooding length was Bathypolypus arcticus, a deep-sea octopus that protected its eggs for 14 months in a lab. Among fish, the Magellan plunder fish of the Antarctic holds the title for the longest guarded incubation period for eggs, at four to five months. Male emperor penguins famously spend two harsh winter months brooding their eggs — a record for birds. Elephants can be pregnant for up to 21 months, which is the longest gestation period for mammals, while frilled sharks carry their embryos internally for about 42 months, Robison and colleagues wrote.

For a group of animals admired for their intelligence, octopuses have been considered surprisingly short-lived. But Octomom's long brooding period suggests this deep-sea octopus species could have a life span far longer than scientists' current estimates for cephalopod longevity. [Cuttlefish Cuties: Photos of Color-Changing Cephalopods]

"We know that shallow-water species live from one to two years, and usually brooding makes up a quarter of the lifespan," Robison said. "If you take that rule of thumb and apply it to this species, you get a lifespan that's potentially 16 to 18 years."

Spending a quarter of their life taking care of their young could actually be a smart reproductive strategy for G. boreopacifica moms.

"Any invertebrate animal has a couple of options," Robison said. "They can either make lots and lots of eggs and hope a few will survive, or take that energy and instead make a few eggs and spend that energy to guard them, protect them and give them a long time to develop so that the ones that hatch are competent and capable, facing the world."

For an octopus species living in a hostile environment like the deep sea, it pays to give birth to "mini-adults," Robison said.

Voight agreed. She has studied G. boreopacifica before, but has never been able to bring a live one to the surface. When she examined hatchlings of the species, she found that the males, at a few centimeters long, were developed enough to have a specialized arm that is used to pass a sperm packet along to a female.

"Those hatchling octopuses were as mature as 3-month-old tropical shallow-water octopus," Voight said.

Both Robison and Voight said no scientist has ever seen G. boreopacifica mate in the wild, and it's still not clear how G. boreopacifica moms are able to survive for so long. They expect the results of this study might not seem as extraordinary when scientists learn more about the lives of cephalopods far below the ocean surface.

"In the deep sea, we have so much to discover," Voight said.