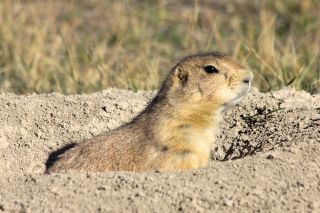 The first time Graeme Shannon bicycled along the grassy terrain of Colorado, he completely missed the prairie dogs. The small rodents blended into the fields, where they foraged on grass and roots before disappearing into their burrows.

After a closer look, Shannon, a postdoctoral behavioral ecologist at Colorado State University in Fort Collins, found two prairie-dogcolonies about a mile (1.6 kilometers) from the nearest road. The relative quiet surrounding the burrows made him wonder how the prairie dogs would react to the loud sounds of traffic.

Other researchers have studied the effects of noise pollution on animals — mostly birds and marine creatures — but few have investigated whether it changes the behavior of land mammals. Typically, it's difficult to isolate the effect of human-made noise from other variables, such as chemical pollution and habitat reduction, which can skew findings. The remote prairie colonies solved that problem: Shannon could bring the noise to the prairie dogs and study its effects on their actions. [In Photos: Peek Into the World of Prairie Dogs]

Unsurprisingly, Shannon found that the noisy rumble of cars and trucks sent more prairie dogs underground, increased their vigilance for predators and reduced the amount of time they spent foraging. But, in an unexpected twist, the prairie dogs did not get used to the noise over time, an effect known as habituation.

"I thought they would start habituating to it, or they would realize that it wasn't a threat," Shannon told Live Science. "But that didn't happen in the three months."

The findings are important for people who manage noise pollution, said Clinton Francis, assistant professor of ecology at California Polytechnic State University in San Luis Obispo, California, who was not involved in the research. For instance, the study may help the U.S. National Park Service's Natural Sounds and Night Skies division, which works to reduce man-made light and noise in protected areas.

"I've sat in a lot of different meetings with wildlife professionals trying to understand how big of a problem noise really is," Francis said. Many people say that some animals are flexible and can grow accustomed to human-made sounds, but "this study shows that they don't habituate to noise."

To study the effects of traffic noise, Shannon spent an hour recording sounds during rush hour on Interstate 25, a busy highway that runs through Fort Collins. "It was almost the same as standing next to the highway," he said. "It really did sound realistic."

Shannon set up a device used by hunters to keep them from being detected near each colony and alternated between monitoring the prairie dogs' natural behavior for an hour and seeing how the traffic recordings affected the animals' behavior.

He visited each colony 10 times during the next three months. During that time, he saw about 5 percent of the prairie dogs play with one another as about 60 percent foraged and another 30 percent scanned the area for predators. On average, Shannon saw 19 prairie dogs above ground at any one time, but that number dropped to 15 when he played the rush-hour recording.

When he played the traffic noises, Shannon found that the proportion of prairie dogs foraging fell by almost 20 percent, whereas vigilance rose by almost 50 percent. The amount of social and resting behavior was also halved during that time.

"Any of that time they're spending underground is time they're not engaging in foraging activities," Francis said. "Prairie dogs have to spend a lot of time above ground, eating to gain weight. This could have consequences on their health."

It's unclear whether the prairie dogs increased their vigilance because they perceived the noise as a threat, or whether the sounds of rush hour impaired their ability to hear predators, such as badgers and black-footed ferrets.

More than 80 percent of land in the continental United States is within 1 mile of a road, according to a 2003 study published in the journal Frontiers in Ecology and the Environment, which showed how pervasive noise pollution is throughout the country.

"The effects of noise might be more insidious than we may have realized," Shannon said. "Here is a tolerant species that is showing marked behavioral shifts. What is happening to our more sensitive species?"

The new findings were published in the August issue of the journal Animal Behaviour.