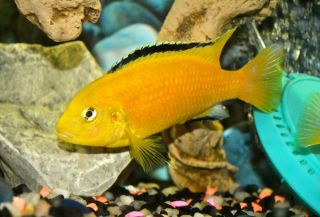 Move over, chimpanzees — there's a new brainiac in town, and this one has gills.

A species of aquarium fish has a surprisingly long memory — it can recall the location of a tasty morsel of food up to 12 days after encountering it, according to a new study. The extended memory may give the fish an evolutionary edge when food is scarce, the researchers suggested.

"Fish that remember where food is located have an evolutionary advantage over those that do not," study co-author Trevor Hamilton, a neuroscientist at MacEwan University in Canada, said in a statement. "If they are able to remember that a certain area contains food without the threat of a predator, they will be able to go back to that area." [See What a Fish Thought Looks Like]

In the hierarchy of intelligent animals, fish are typically placed well below chimpanzees, dolphins and rats, but above cockroaches. Popular wisdom holds that fish have anywhere from a 3-second to a 30-second memory.

But after talking with Erica Ingraham, a student at MacEwan University who owned aquarium fish, Hamilton wondered whether some fish species were smarter than usually thought. African cichlids (Labidochromis caeruleus), in particular, tend to show aggression, which would normally require longer-term memory to remember past grievances. In addition, past studies have shown that cichlids use humanlike logic.

So Hamilton and his colleagues trained African cichlids to enter a zone of an aquarium to receive a food reward. After three days of 20-minute training sessions, the fish were left to "rest" for 12 days.

Afterward, the fish were allowed to roam the area again as motion-capture software recorded their swimming paths.

The cichlids lingered most often in the area where they had previously found food, likely because they remembered the tasty treats and were seeking them out.

In addition, the fish abandoned their preference for that zone when the researchers trained them to associate a different stimulus with food, suggesting that, indeed, they were hanging out there in hopes of finding food.

The findings suggest that fish have the ability to form longer-term memories and associations, which could aid them in higher-level tasks, the researchers said.

"There are many anecdotes about how smart these fish are," Hamilton said. "Some people even believe that their cichlids watch television with them."

The work on fish memory will be presented Wednesday (July 2) at The Society for Experimental Biology meeting, and has yet to be published in a peer-reviewed scientific journal.