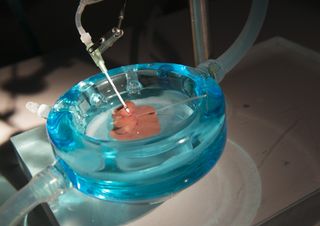 A new technique could more than triple the amount of time livers can be stored before an organ transplant, a study in rats suggests.

Greatly extending the amount of time organs can be stored could help address the critical shortage of donor organs the world faces, researchers said.

The new strategy involves "supercooling" organs, to below freezing temperatures, but without freezing them solid. In experiments, this method significantly extended the amount of time rat livers could be preserved for transplantation into donor rats, to up to four days. (Normally, rat livers can only be stored for up to about 24 hours before they become unusable, the researchers said.)

However, the new supercooling technique could change that. "The duration of preservation we have achieved — four days — is the longest that has even been done that allows successful transplantation," said study co-author Bote Bruinsma, a medical engineer at Harvard Medical School in Boston. [9 Most Interesting Transplants]

Extending the organ preservation time could allow donor organs to be transplanted into people over a wider region, and give health care teams more time to prepare organ recipients for transplant, the researchers said.

Other methods of extending organ preservation time haven't been practical, the researchers said. For instance, one method uses machines that constantly supply organs with fluid that, like blood, is loaded with oxygen and can keep the organs alive. However, keeping organs hooked up to machines for hours or days is not practical for long-term organ preservation, the researchers noted.

Another method is to keep organs as cold as possible to slow or even stop the process of decay. However, cooling organs to below-freezing temperatures can lead ice crystals to form within the organs' cells, and can damage the tissues.

The new technique involves bringing organs to below-freezing temperatures, but not freezing them solid. Instead, the researchers infused them with nontoxic antifreeze compounds that helped keep cells from freezing even when they were 21.2 degrees Fahrenheit (minus 6 degrees C) — colder than the freezing temperature of water.

In addition, the researchers also used machine-circulated fluids to nourish the organs and keep them alive. However, the researchers did not have to keep the organs constantly suffused with oxygenated fluid — rather, they needed machine perfusion only for brief periods — one hour before supercooling and again three hours after the livers were warmed back up to above freezing temperatures.

"The fact that livers could be successfully transplanted at all after being stored at subzero [Celsius] temperatures is a novel finding," Bruinsma told Live Science. "The fact this work shows that we can actually use this supercooling technique to markedly extend preservation time is very exciting."

The researchers acknowledged that their new method is more complicated than current preservation techniques. Still, they "expect that the benefits will greatly outweigh the added complexity," Bruinsma said.

This strategy could, in principle, be used for organs other than the liver, such as kidneys, hearts and lungs, the researchers said. "We expect only slight modification would be needed for other organs," Bruinsma said, adding that portable fridges could help keep organs supercooled during transport.

However, the investigators cautioned that further research is needed to see if this technique could work with human organs. "The most important difference is the size of the liver," Bruinsma said. Human livers are about 4.5 lbs. (about 2 kilograms), so they may be more challenging to supercool than rat livers, which weigh 0.02 lbs. (10 grams).

"We are currently testing supercooling on human livers that were discarded for transplantation and donated for research," Bruinsma said. "This will allow us to test the feasibility of this technique in the human organ."

The scientists detailed their findings online June 29 in the journal Nature Medicine.