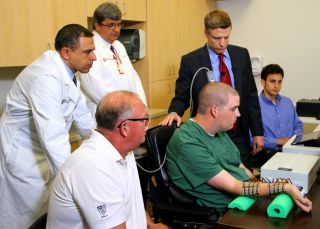 For the first time ever, a quadriplegic man has moved his hand using his own thoughts.

Ian Burkhart, a 23-year-old who became paralyzed after a diving accident four years ago, is the first patient to try out Neurobridge, which reroutes brain signals. The system combines a computer chip implanted in the brain, a brain-computer interface, and a sleeve that transmits electrical signals to the patient's forearm and hand.

Neurobridge works as a kind of neural "bypass," taking signals from the brain, rerouting them around the damaged spinal cord and sending them directly to the muscles, according to its developers, including doctors at the Ohio State University Wexner Medical Center and researchers from Battelle Memorial Institute in Columbus, Ohio.

"Other devices use electrical stimulation, but they are not responsive to the individual," Dr. Jerry Mysiw, medical director of Rehabilitation Services at Wexner, told Live Science. "I think we've demonstrated this is another milestone in the evolution of human-machine interface technology." [10 Technologies That Will Transform Your Life]

Burkhart started preparing months before the trial began. In general, when muscles become paralyzed, they wither and shrink from lack of use. Burkhart used the sleeve to stimulate and build up his atrophied forearm muscles, so they would respond better to the Neurobridge signals.

For the system to work, surgeons needed to place the Neurobridge computer chip in a precise spot in Burkhart's brain, in the part of the motor cortex that controls arm and hand movement, Mysiw said. To find the spot, the team hooked Burkhart up to an fMRI machine,which shows activity in the brain, and showed him images of hand motions and asked him to think about each motion. Then during a delicate three-hour surgery, doctors implanted a pea-sized chip on the area of Burkhart's brain that lit up during the fMRI test.

The chip reads the brain signals and sends them to a computer that recodes them as signals that the muscles can pick up. The computer then sends those signals to the sleeve, which is covered with about 200 electrodes, which stimulate the muscles and make them move.

The researchers at Battelle designed software and algorithms that can distinguish among different brain signals that correspond to various movements. "It's like walking into a crowded room with hundreds of conversations going on, isolating just one and learning the language being spoken," Chad Bouton, senior research scientist at Battelle, told Live Science.

Still, using Neurobridge requires a remarkable amount of concentration, Mysiw said. Users must rely entirely on visualizing the motion, because they can't sense any information about physical touch coming from the hand they are moving.

"For [Burkhart], it's like trying to stand on a leg after its fallen asleep," Mysiw said.

Previous technologies have allowed patients to control robotic arms with their thoughts, but Neurobridge is the first that has allowed patients to move their own limbs. The team next hopes to test the Neurobridge on other patients, as part of the ongoing clinical trial. Eventually the technology could be adapted to treat other kinds of paralysis, like those caused from stroke or traumatic brain injury, the researchers said.