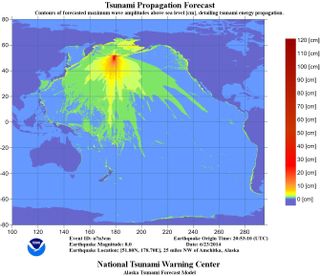 Tsunami warnings were issued locally for Alaska's coastal areas from Nikolski to Attu. A small tsunami of just over half a foot (15 centimeters) was recorded at Amchitka, Alaska, an hour after the earthquake hit, the National Tsunami Warning Center said.

Officials said there was no risk of tsunamis elsewhere in the Pacific, including Hawaii, Washington, California and British Columbia, Canada.

The earthquake struck at 12:53 p.m. local time at a depth of 71 miles (114 kilometers), the USGS said. Several strong aftershocks have already followed this afternoon, including a magnitude-6 and a magnitude-5.9, the USGS reports.

There were no immediate reports of damage from the villages potentially affected by the earthquake. However, residents were still under the tsunami warnings and may not have had a chance to check for damage yet, the Associated Press reported.

The last great earthquake at the Rat Islands was in 1965, when a magnitude-8.7 temblor triggered a huge 32-foot-high (10 meters) tsunami on Shemya island.

Earthquakes of this size can cause significant damage. Even well-designed buildings can be damaged or, in some cases, destroyed depending on the severity of the quake and a building's proximity to the epicenter.

But the damage caused by any single event depends on the quake's depth, proximity to populated areas, building standards in the region, as well as the type of earthquake.

An earthquake's magnitude is a measure of the energy released at the source. It is just one predictor of the shaking that may ensue, which is affected by local and regional geology. Scientists know in a general sense what causes earthquakes, but they are unable to predict specific quakes.