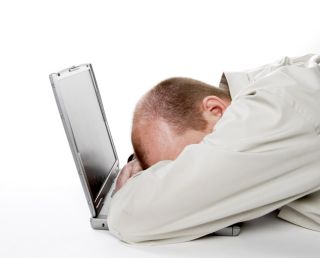 For new parents, transatlantic travelers and people who stay up watching late-night TV, life is all about getting enough sleep.

No one really knows why human and other animals sleep, or why, after losing sleep night after night, we become crazed. We bumble around, grumpy and complaining, and then lie down for a good sleep but end up wide awake.

And now, Francesco Cappuccio at the University of Warwick Medical School in Coventry, Canada, claims that too little sleep will also kill us.

Cappuccio and colleagues at the University College, London, gathered sleep data on 10,308 civil servants in the late 1980s and then again in the early 1990s. Of course, some of those government employees had died in the meantime, and so the researchers could factors out such variables as smoking, exercise, obesity and blood pressure and concentrate on how sleep might send us into the Big Sleep.

It seems that how much sleep the civil employees got (not at their desks, but in bed at night) played a part in putting them to sleep permanently.

Those who changed their sleep habits by cutting the time in bed from 7 to 5 or less hours were 1.7 times more likely to die, and twice as likely to die from cardiovascular problems.

Oddly enough, sleeping too much also turned out to be bad. Going from the standard 7 hours of sleep to more than 8 hours also upped the risk of death twofold.

This research suggests that we all should be getting 7 hours of sleep a night, and we should religiously stick to that quotient.

But anthropologist James McKenna of Notre Dame begs to differ.

McKenna studies the sleep patterns of parents and babies, and he has looked at the history of sleep in the West as well as how people sleep in other cultures.

"In America, you are expected to go to bed at 11 o'clock and basically die until 7 a.m., and if you don’t, you have a pathology—insomnia," McKenna says.

Americans, according to McKenna, also have a certain reverence for sleep, which makes it a cultural issue worthy of endless conversation, and research.

But in other cultures where people don't work in offices, no one is all that interested in who gets how much sleep. Also, everyone gets up at least once a night and does something, like tend the fire or comfort someone's baby.

"Humans are really bi-phasic sleepers," McKenna claims. He says that we are biologically designed to sleep in two or more interrupted bouts during the night and then fall asleep again during the day. In other words, there is no such thing as a good night's sleep, but the catnap is the trade-off.

Sleeping at our desks in the middle of the day, then, is a good thing. If Cappuccio searched his data base and found out which government employees nap during the work day, chances are the desk nappers are still with us.