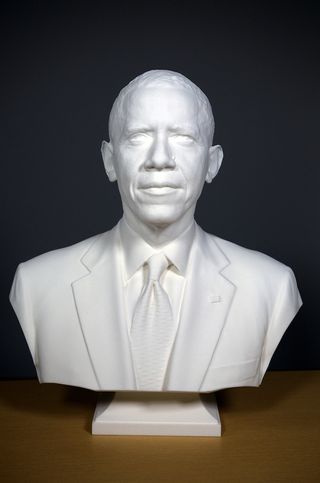 Barack Obama will have an unusual addition to the National Portrait Gallery.
(Image: © Smithsonian Institution)

To his list of firsts, Barack Obama can add that he was the first U.S. President to have himself scanned and 3D printed.

Obama's 3D-printed bust and mold of his face were on display Wednesday (June 18) at the first-ever White House Maker Faire, a celebration of students and entrepreneurs who are using technology to create new products and businesses, according to the Smithsonian Institution.

A team of Smithsonian 3D digital-imaging specialists scanned the president earlier this year. They used the University of Southern California's Light Stage face scanner to capture Obama's face in high resolution, and handheld 3D scanners and SLR cameras to create a reconstruction of his bust. [The 10 Weirdest Things Created By 3D Printing]

The scans and printed models will become part of a collection at the Smithsonian's National Portrait Gallery, which showcases multiple images of each president. The 3D portraits will be added to the museum's current collection of works representing Obama.

The Smithsonian X 3D collection includes models of the Wright Flyer, a canard biplane that was the first successful heavier-than-air powered aircraft built by the Wright brothers in 1903; the remnants of supernova Cassiopeia A; a whale fossil; and a sixth-century Buddha statue. These objects are available online and anyone with a 3D printer can print them on a 3D printer.