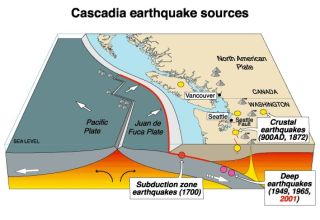 A cross-section of a portion of the Cascadia subduction zone.
(Image: © USGS.)

Natural fracking may be to blame for weird "slow" earthquakes that last for hours to days, a new study suggests.

Researchers only recently discovered slow earthquakes, and scientists are still figuring out how they work. These slow-motion quakes have been detected at subduction zones offshore of Japan, New Zealand, the United States and Canada. A subduction zone is a bang-up between two of Earth's tectonic plates, where a denser oceanic plate dives under a lighter continental plate.

Each subduction zone comes with its own puzzling pattern of repeating slow earthquakes. For Cascadia, the quakes strike every 14 months; in Japan, it's every six months, and New Zealand slips every two years, said lead study author Pascal Audet, a geophysicist at the University of Ottawa in Ontario, Canada. [Image Gallery: This Millennium's Destructive Earthquakes]

Based on the new study, the researchers think this pattern is linked to the amount of quartz dissolved in trapped water under pressure on the subduction zone fault. The trapped water (or fluid pressure) in small spaces in rocks lining the plate boundary builds up until it cracks open the fault, then the cycle repeats. Faults with more quartz (or silica) in their fluids will knit together more quickly, shortening the time between earthquakes.

"The fluid properties are playing a huge role in controlling what goes on in the fault," Audet told Live Science's Our Amazing Planet. "The key property here is that when there is more quartz, faults will seal faster and shut off fluid circulation, which enables buildup of fluid pressure."

When the Earth shifts during a quake, the pressure on the water drops nearly instantly, Audet and co-author Roland Burgmann of the University of California, Berkeley, said. Then, the fluid pressure rebuilds until the next quake hits.

The fluids come from the sinking oceanic plate. As it descends, the crust heats up, and fluids, such as seawater, escape and rise. The plate boundary traps the rising fluids, leading to increasing pore fluid pressure. Many other studies have noted high fluid pressure in zones where slow earthquakes occur.

The researchers measured the amount of quartz in the continental crust at the Cascadia subduction zone with seismic waves. Differences in earthquake wave speeds provide a high-resolution image of the rocks along the plate boundary. Researchers can estimate fluid pressure and rock properties from zones with faster or slower earthquake wave speeds.

The high levels of quartz in the crust lead the scientists to conclude that fluids on the plate boundary are also rich in quartz; the fault itself is too thin to image with seismic waves, Audet said. The crust is 5 to 15 percent quartz by volume, the researchers found.

Slow earthquakes unleash the same amount of seismic energy as regular earthquakes, but because the fault movements last for minutes to months, they cause no damaging shaking. These sluggish quakes also originate deeper on the fault than where faster temblors tend to strike. Scientists aren't sure if slow earthquakes can trigger deadly fast quakes, but many researchers are investigating the link between the two kinds of earthquakes.

"We don't know why there is a transition from regular to fast earthquakes, but that's really where the research is headed," Audet said.