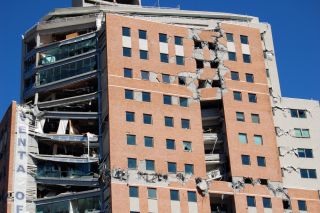 The Pacific Northwest is woefully unprepared for a major earthquake like the one that struck Chile in 2010.
(Image: © Yai / Shutterstock.com)

The clock is ticking on the next big earthquake in the Pacific Northwest, and experts fear it will be a monster.

Following the deadly magnitude-9.0 Tohoku earthquake and tsunami that struck Japan in March 2011, Oregon legislators commissioned a study of the impact a similar quake could have on the state, according to the Associated Press.

The report, "Oregon Resilience Plan: Reducing Risk and Improving Recovery for the Next Cascadia Earthquake and Tsunami," was presented to legislators Thursday (March 14).

Within its pages is a chilling picture of death and destruction that would cripple the entire Pacific Northwest, from Northern California to British Columbia.

More than 10,000 people killed. Bridges, dams, roadways and buildings — including Oregon's State Capitol in Salem — in a state of utter collapse. No water, electricity, natural gas, heat, telephone service or gasoline — in some cases, for months. Economic losses in excess of $30 billion.

The seismically active region has felt temblors before, most notably a massive earthquake and tsunami in January 1700 that wiped out entire forests in what is now Oregon and Washington and caused a deadly tsunami in Japan, thousands of miles across the Pacific Ocean. [Waves of Destruction: History's Biggest Tsunamis]

"This earthquake will hit us again," Kent Yu, chair of the commission that developed the report, told Oregon legislators, according to the Daily Mail. "It's just a matter of how soon."

That titanic 1700 shaker was a megathrust earthquake on the Cascadia Fault, a seismic zone that stretches for almost 700 miles (1,100 kilometers) just off the Pacific Northwest coast. Based on current understanding of the fault's seismic history, scientists estimate quakes occur along the line roughly every 240 years.

In other words, another big Cascadia Fault earthquake is "long overdue," the International Science Times reports.

The report also noted that, geologically speaking, Japan and Oregon are mirror images of each other. There is, however, one important difference: Japan is much more prepared for earthquakes.

And Oregon is hardly the only region of North America overdue for a large earthquake: The Lake Tahoe region on the California-Nevada border is home to the West Tahoe Fault, which generally sees a quake every 3,000 to 4,000 years, and the most recent temblor occurred 4,500 years ago.

Elsewhere in California, the southern San Andreas Fault last produced a big temblor in 1690, and has been relatively quiet ever since. That isn't good news, since a major earthquake usually occurs there every 180 years, according to recent research, and the fault line now has more than 300 years of pressure built up.

Whereas the West Coast is usually considered the most seismically active region of North America, the East Coast also has earthquakes, just not as often. Fault lines have recently been discovered near New York City, and the Indian Point nuclear power plant, about 24 miles (39 km) north of the city, straddles the previously unidentified intersection of two active seismic zones.

In virtually all of these regions, preparation for earthquakes has been woefully inadequate, say many experts. Maree Wacker, chief executive officer of the American Red Cross of Oregon, laments the state of readiness: "Oregonians as individuals are underprepared," Wacker told the Daily Mail.

Correction: This article was updated on March 18, 2013, to note the proper location of Oregon's state capitol building in Salem (not Eugene, as previously stated).