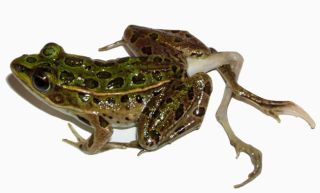 Infectious parasites cause missing limbs, extra limbs and other malformations in frogs--and farm watershed may be to blame.
(Image: © Pieter Johnson/University of Colorado at Boulder)

"This is the first study to show that nutrient enrichment drives the abundance of these parasites, increasing levels of amphibian infection and subsequent malformations," said Johnson.

Johnson noted that he and his colleagues' work, which is detailed in the Sept. 24 issue of the Proceedings of the National Academy of Sciences, could also explain "a wide array of diseases potentially linked to nutrient pollution."

Frog species also are vanishing from Earth in the past few decades for reasons that are difficult to tease apart, including habitat loss, global warming and emerging diseases such as one caused by chytrid fungus. Nutrient pollution and limb malformations also contribute, Johnson said.

A worldwide study of more than 6,000 species of amphibians recently concluded that 32 percent were threatened and 43 percent were declining in population.

Deformed frogs first gained international attention in the mid-1990s, when a group of schoolchildren discovered a pond where more than half of the leopard frogs had missing or extra limbs, Johnson said. Since then, widespread reports of deformed amphibians have led to speculation that the abnormalities were being caused by pesticides, increased ultraviolet radiation or parasitic infection.

Parasite infection is now recognized as a major cause of such deformities, but the environmental factors responsible for increases in parasite abundance have largely remained a mystery.

"What we found is that nitrogen and phosphorus pollution from agriculture, cattle grazing and domestic runoff have the potential to significantly promote parasitic infection and deformities in frogs," Johnson said.

The trematode life cycle involves three host species. The tiny parasites form cysts in the developing limbs of tadpoles, causing missing limbs, extra limbs and other malformations, Johnson said. Aside from this stage and an infectious one in snails and the cyst stage in frogs, predators complete the trematode life cycle by eating infected frogs and spreading the parasite back into the ecosystem.

To discover the link between farms and the trematode infections, Johnson and his team built 36 artificial ponds similar to farm stock tanks, where frogs and salamanders often breed and deposit their eggs.

The researchers then stocked each tank with snails and green frog tadpoles and, in addition to adding nutrients, they dropped in parasite eggs. In ponds with added nutrients, Johnson said, the total mass of snails was 50 percent greater and parasite egg production was eight times as great.

The infection rate in frogs rose between two to five times in those tanks, he added.

"We were able to watch nutrient pollution move through the life cycle of the parasite as it cascaded through the food web," he said. "Since most human diseases involve multiple hosts, understanding how increased nutrient pollution affects freshwater and marine food webs to influence disease is an emerging frontier in ecological research."