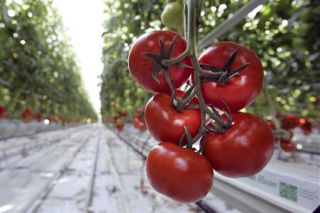 Organic farming is often regarded as inefficient. But according to a new study, it could yield up to three times as much food as other methods that have come to be considered conventional.

“If farming were to switch to organic agriculture on the current amount of land that is being used for farming and livestock production, then that system could produce enough calories to feed the world without requiring people to change their dietary habits,” said study team member Catherine Badgley, a research scientist at the Museum of Paleontology, University of Michigan.

Badgley and her colleagues admit that organic farming is labor intensive. But their review of yield data for the past 30 years on different agricultural methods found that in developed nations, yields were almost equal from organic and conventional farms. Developing countries—where farmers may not have access to expensive fertilizers—could almost triple their yield by using organic methods without putting extra farmland into production.

"My hope is that we can finally put a nail in the coffin of the idea that you can't produce enough food through organic agriculture," said study team member Ivette Perfecto, of the University of Michigan, School of Natural Resources and Environment.

The results are detailed in the July 4 issue of Renewable Agriculture and Food Systems.

Two major objections to organic farming are low yields and lack of sufficient nitrogen resources. Crops need extra nitrogen to grow green tissues, such as leaves, for photosynthesis. Unlike conventional farmers, organic agriculturalists don’t use bagged nitrogen fertilizers and must come up with natural ways of providing this necessary element.

One way is to plow legume cover crops into the soil between growing seasons. Such "green manures," the authors found, provide the nitrogen needed for the next crop without having to use synthetic fertilizers.

This is good news for developing countries because many farmers lack access to the expensive fertilizers and pesticides that farmers use in developed countries to produce high yields, Perfecto said.

However, because of the convenience and labor-saving methods of conventional agriculture, organic farming has taken a back seat since the technological breakthroughs that led to significant yields beginning in the 1940s, called the green revolution (not to be confused with today's "green" practices designed to minimize environmental impacts).

“We’re not trying to convey the idea that it’s less work to farm organically, in fact certainly not,” Badgley told LiveScience. “And there’s no question that green-revolution agriculture has been full of labor-saving devices, but those have come at quite a price, at least for environmental quality.”

“It’s much easier to buy a bag of synthetic fertilizer than spread manure or grow your cover crops or run livestock over the field,” she added. “But the actual soil health is ultimately better over the long term if one uses the organic methods.”

Better soil health could eventually increase yield. However, this message has not been nearly as circulated as it should be, the authors note.

“There are people who are spokespersons for the green-revolution agriculture that have been dismissive of organic agriculture because of low yields,” Badgley said. “They have gotten the ear of much of the media, [and there] has been a consistently articulated inaccurate message about organic agriculture from people who want to protect a status quo.”