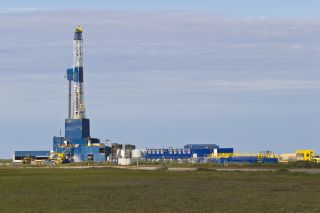 A drone will scour the Prudhoe Bay oil field on Alaska's North Slope in the first federally authorized use of a commercial drone in the United States.
(Image: © David Gaylor | Shutterstock)

For the first time, the Federal Aviation Administration (FAA) has approved the use of a commercial drone over land, authorizing it to fly over and inspect the largest oil field in the nation, the agency announced today (June 10).

With a special certificate from the FAA, drone-maker AeroVironment is now allowed to fly an unmanned vehicle over a BP-operated oil field in Alaska's remote Prudhoe Bay, which yields about two-thirds of the oil produced in the state.

"These surveys on Alaska's North Slope are another important step toward broader commercial use of unmanned aircraft," U.S. Transportation Secretary Anthony Foxx said in a statement. "The technology is quickly changing, and the opportunities are growing." [5 Surprising Ways Drones Could Be Used in the Future]

Both entrepreneurs and big companies like Amazon have been investigating the possible commercial uses of drones, a burgeoning industry expected to be worth billions. Those business plans, however, hinge on the FAA; the agency has banned the use of commercial drones while it drafts regulations to ensure the unmanned vehicles can be safely operated in shared airspace, within cities and near buildings and people. In December 2013, the FAA selected six drone-testing centers across the country to help get regulations in place as early as 2015.

AeroVironment began its survey for BP on Sunday (June 8) using its Puma AE drone. The small, hand-launched vehicle has a wingspan that stretches 9 feet (2.7 meters), and can spend up to 3.5 hours in the air. The drone can also fly at relatively low altitudes, between 200-400 feet (60-120 m), according to the Monrovia, California-based company.

In Alaska, the Puma will scan the 200 miles (320 kilometers) of North Slope roadways, as well as BP pipelines and equipment in the region. The imagery and data collected by the drone's sensors can be processed into 3D computerized models and will help BP look for areas in the oil field that need maintenance, officials from AeroVironment said.

"This new solution is now helping BP manage its extensive Prudhoe Bay field operations in a way that enhances safety, protects the environment, improves productivity and accomplishes activities never before possible," Tim Conver, AeroVironment CEO, said in a statement. "This is an important achievement for our joint team and for the industry in demonstrating the safe and effective use of our proven UAS (unmanned aircraft systems) technology for commercial applications," Conver added.