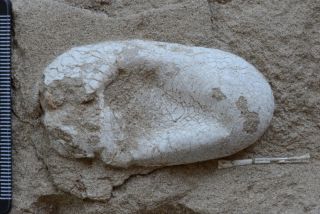 A three-dimensionally preserved pterosaur egg that was found in the Turpan-Hami Basin in China.
(Image: © Xiaolin Wang)

The first three-dimensionally preserved eggs of ancient winged reptiles that lived more than 100 million years ago have been unearthed in China.

Five intact eggs were found, along with dozens or more adult fossils, of a new type of pterosaur, a group of prehistoric winged reptiles that dominated the skies during the time of dinosaurs. These creatures included some of the largest flying animals that ever existed.

"We found a lot of pterosaur bones which belong to different individuals in the sites, with five eggs," said study researcher Xiaolin Wang, a paleontologist at the Institute of Vertebrate Paleontology and Paleoanthropologyat the Chinese Academy of Sciences in Beijing. [See photos of the ancient pterosaur eggs & fossils]

The fossil record of pterosaurs is lacking, and before now, only four individual flattened pterosaur eggs had been discovered by scientists.

The researchers found the fossils of the new genus and species, Hamipterus tianshanensis, in an area first excavated in 2005 in the Turpan-Hami Basin, located south of the Tian Shan Mountains in Xinjiang, in northwestern China. Thousands of bones may be hidden in the area where the eggs and skulls of adult male and female pterosaurs were found, the researchers said.

The newly uncovered pterosaurs likely perished in a storm about 120 million years ago, during the Early Cretaceous period, Wang said.

Wang and his team found that the eggs were soft and pliable, with a thin, hard outer shell and a thick, soft inner membrane, similar to the eggs of some snakes. The pterosaurs probably buried their eggs in the sandy shore of an ancient lake to prevent them from getting dried out, the researchers said.

The researchers also uncovered many adult pterosaur fossils nearby. They examined 40 male and female adult specimens, and found differences in the size, shape and robustness of the animals' head crests.

Like modern bats and birds, pterosaurs were flying vertebrates, but their wings were different. Birds have fused palms and asymmetric feathers, whereas bats and pterosaurs have membranes supported by fingers, Wang told Live Science. Bat wings are also attached to four fingers, while pterosaur wings are only attached to the fourth finger, he said.

The newly found cluster of fossils suggests these pterosaurs lived together in large social groups, the researchers said. The creatures likely belonged to gregarious colonies, because the fossils had not been transported far from where they originated, Wang said.

Finding the eggs near so many adult pterosaurs could indicate that a nest site may be nearby. The vulnerability of the pterosaur eggs may also explain why so few have survived in the fossil record, the researchers said.

Wang and his colleagues reported their findings today (June 5) in the journal Current Biology.