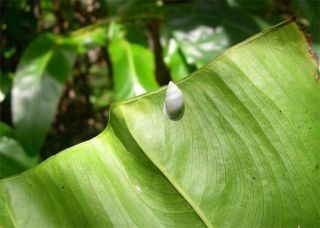 Tahitian tree snails like this one (attached to the underside of a leaf in Tahiti) are ovoviviparous, meaning that instead of laying eggs, parents give birth to live baby snails.
(Image: © John B. Burch)

For more than a century, scientists have puzzled over how Tahitian tree snails slugged from Tahiti to two relatively distant Polynesian islands. Even more mind boggling, while the Tahiti snails sport a range of shell colors, the island-hoppers are all white.

Finally, the case has been solved. And it's all about fashion among ancient Polynesians. The white shells, thought to be most prized for jewelry, were spread more broadly by the natives. In fact, the white-shelled snails were likely transported alive and raised on other islands.

The new study, reported in the Sept. 12 online edition of the journal Proceedings of the Royal Society B, focused on Partula hyalina, a tree snail found on Tahiti and the Austral and Southern Cook islands.

The tree-snail oddities are three-fold:

Various ideas to explain this mollusk mystery have come up short. For example, perhaps the tree snails were inadvertently brought from Tahiti and introduced to the other islands.

If that were the case, the slimy invertebrates would be dispersed somewhat randomly among the islands, with nearby islands being more likely than distant ones to receive them.

"The fact that they're not present on nearby islands suggests deliberate introduction to the more distant archipelagos," said lead author Diarmaid O'Foighil of the University of Michigan's Museum of Zoology.

To investigate the transport of the tree snails, O'Foighil and his colleagues ran genetic analyses of snails from the three islands. They found the snails all originated on Tahiti, indicating, the scientists say, the snails were deliberately carried from Tahiti to the other islands.

The reason for snail transport could lie in fashion and basic economic principles of supply and demand. "We know that Polynesians used these shells ornamentally," O'Foighil said. "We think the fact that the white shells were aesthetically valuable within this regional trading network explains their unusual distribution."

On Tahiti, where the white snail shells were relatively common, they would not have been highly prized, but as one moved farther away from the "snail stock," value would ramp up. Following that idea, for inhabitants of nearby Moorea, demand for the shells would be slightly greater compared with Tahiti.

For fashion-setting entrepreneurs on more distant islands, the white shells would have seemed a rare treasure, one worth the lengthy travel to Tahiti to bring back live tree snails and raise them.

"The combination of aesthetic preference and fashionability made the unlikely introduction possible," O'Foighil said.