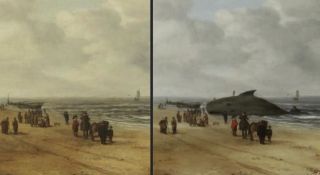 "View of Scheveningen Sands," before and after conservators uncovered a beached whale in the painting.
(Image: © Fitzwilliam Museum)

When art conservators in the United Kingdom were cleaning a 17th-century Dutch seascape, they found a surprise: an image of a beached whale that had been hidden for at least 150 years.

Until recently, the painting — "View of Scheveningen Sands," created by Hendrick van Anthonissen around 1641 — simply showed groups of people gathered on a beach in The Hague in the Netherlands.

"It seemed a very unassuming painting depicting a very calm beach scene set in winter," Shan Kuang, a conservation student at the University of Cambridge's Fitzwilliam Museum, said in a new video explaining the strange find. "There were clusters of people gathered. I was unclear why they were there, but it didn't seem too out of normal." [Image Gallery: Technology Reveals Hidden Art Treasures]

At the time the painting was created, there was a surge of public interest in whales, researchers at the museum said, noting that historical records document a number of whale strandings on the coastline of the Netherlands in the beginning of the 17th century.

The Fitzwilliam Museum acquired "View of Scheveningen Sands" in 1873 when a donor handed over several Dutch landscape paintings. There is no indication that anyone at that time knew the van Anthonissen painting originally featured a beached whale. It's not clear when or why someone decided the whale had to go, but an analysis of the paint used to cover up the animal suggests the alteration took place in the 18th or 19th century before the painting was donated.

"Today, we treat works of art as entities, but in the previous centuries, paintings were often elements of interior design that were adapted to fit certain spaces — or adjusted to suit changing tastes," Kuang explained in a statement. "It's possible that the whale was removed because the presence of a dead animal was considered offensive — or perhaps without the whale the picture was more marketable."

The painting is on permanent display in the Fitzwilliam Museum's gallery of Dutch Golden Age painting.