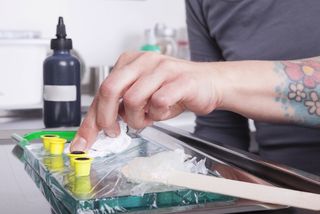 Tattooing a new nipple and areola is a well-established step in breast-reconstruction surgery on women who have had cancer. However, experts now say that the plastic surgeons who usually create the tattoos can learn something from professional tattoo artists when it comes to making the tattoos look more realistic.

"Traditionally, most nipple-areola tattoos have been created using lighter ink for the areola and a central circle of darker ink for the nipple," said Dr. Eric G. Halvorson, a plastic surgeon at Brigham and Women's Hospital in Boston. "Although this method produces a satisfactory result, we recently used a new, three-dimensional technique inspired by a tattoo artist, with improved results."

The traditional techniques for nipple-areola tattooing, he explained, ignore the aesthetic principles of light and shadow that create the appearance of depth on a two-dimensional surface. "The three-dimensional technique performed by tattoo artists offers an aesthetically superior result," he said.

Halvorson co-authored an article on the topic that appears in the May issue of the journal Plastic and Reconstructive Surgery. [7 Side Effects of Cancer, and How to Cope with Them]

There are several reasons why the tattoos created by doctors in medical facilities don't measure up to those done by professional tattoo artists. For one, medical practitioners use machines that work at higher speeds than those of a tattoo artist, which can result in a longer time to heal, scarring and poor pigment retention, Halvorson said.

"The pigment choices used in medical facilities are often very limited, he said, "plus, they have been known to fade over time."

Although Halvorson said he still performs nipple-areola tattoos in his practice, he has modified his technique to replicate the results obtained by professional tattoo artists. "Unfortunately, we are limited by the equipment we have," he said.

Many women, he pointed out, have reservations about visiting a tattoo parlor and prefer to have their procedure performed in an established medical facility.

"That being said, I think medical tattoo practitioners have much to gain from paying attention to the techniques used by professional tattoo artists," Halvorson said. Patients will benefit greatly when the two industries are able to share resources and knowledge, he added.

The tattoo industry's focus on realism has the potential to expand the role of medical tattooing to other areas of the body, including the eyebrows, lips and nail beds, Halvorson added.