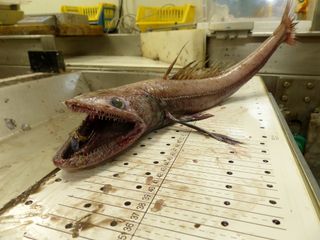 This deep-sea lizard fish (Bathysaurus ferox) was found at a depth of 656 feet (200 meters) on the continental slope off the west coast of Scotland.
(Image: © Dr. Clive Trueman)

Slickhead fish don't have many champions. They're watery-muscled bottom feeders (that's not an insult), and they're not pretty, with tar-colored bodies and heads stripped of scales.

You won't find slickheads next to salmon and trout at a fish market. Yet in U.K. waters, the abundant but undesirable creatures often fill fishing nets and trawls, much to the displeasure of fishermen.

"I like them because nobody does," said Clive Trueman, a researcher from Britain's National Oceanography Centre and the University of Southampton, laughing. But Trueman has another, serious reason to be fond of the ugly fish: These animals and other little-understood deep-sea dwellers suck up huge amounts of carbon dioxide (CO2). [In Photos: Spooky Deep-Sea Creatures]

In a new study, Trueman and colleagues found that deep-sea fish capture more than a million tons of carbon dioxide from U.K. and Irish surface waters each year.

Under the current European Union carbon cap-and-trade scheme, this amount of CO2 equates to 8-14 million British pounds ($13-23 million) per year in carbon credits, the researchers estimated.

"One of the things that we really wanted to be able to do was show that these slightly obscure animals actually perform a service that has an economic value, even though you can't see them or eat them," Trueman told Live Science.

Many scientists have assumed that bottom feeders get most of their energy from tiny particles of organic matter that settle on the seafloor. But Trueman and his team found, instead, that at least half or more of all the fish living on the seafloor might get their energy from animals that migrate each day between the surface and deep water, like jellyfish, cephalopods and small fish.

These traveling prey animals might otherwise recycle CO2 back into the atmosphere through the surface waters. But when they get eaten close to the seafloor by animals that never come to the surface, all of the carbon these roving fish were packing gets locked down at the bottom of the ocean, Trueman explained.

The researchers collected hundreds of muscle tissue samples from fish caught in trawls on the continental slope west of Ireland, at depths ranging from 500 to 1,800 meters (1,640 to 5,900 feet). In these samples, the researchers looked at the concentration of stable carbon and nitrogen isotopes, which are natural tracers of the flow of energy through ecosystems, Trueman explained. From an animal's isotope levels, scientists can partially reconstruct its diet and place in the food web.

There is wide agreement among scientists that emissions of heat-trapping greenhouse gases, such as methane and carbon dioxide, are driving climate change. Natural carbon sinks like forests and oceans are critical for helping soak up some of these gases.

However, the amount of carbon that deep-sea fish trap is miniscule compared with the emissions released into the atmosphere by humans.

"U.K. emissions from fossil fuel burning in 2010 were 494 million tons of CO2," said Pieter Tans, of the U.S. National Oceanographic and Atmospheric Administration's Earth System Research Laboratory, who was not involved in the study. "The paper may have more relevance for our understanding of biogeochemical cycles internal to the oceans."

Even so, as fishing, energy and mining operations move into deeper waters, Trueman said researchers will need to understand how bottom feeders — which may play an important but unappreciated role in marine ecosystems — can be properly managed, conserved and exploited.

The research was detailed in the journal Proceedings of the Royal Society B.

Editor's note: This story was updated to include comments from an outside researcher.