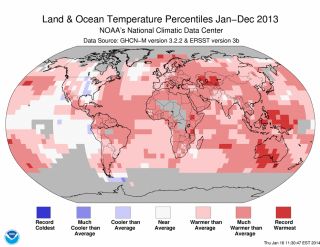 A massive oceanic heat wave is rolling toward the eastern Pacific Ocean right now, a telltale signal of a brewing El Niño.

An El Niño is a natural climate cycle marked by warmer-than-average temperatures in the waters of the equatorial Pacific Ocean. Forecasters won't make their final call until later this summer, but all signs point to an El Niño this year, perhaps one as powerful as what occurred in 1982 or 1997. But even a weak El Niño could hike global temperatures to record levels, scientists think.

"If we have the El Niño that most are predicting, I think there's a good chance that it'll end up breaking the global temperature record set in 2010," said Andrew Dessler, a climate scientist at Texas A&M University in College Station.

That's because Earth's temperature is already rising, so any year with a boost from El Niño could easily break records. [How El Niño Causes Wild Weather All Over the Globe (Infographic)]

The warmest years in the past decade, 2005 and 2010, followed weak El Niño years, according to NASA temperature records.

This year's predicted El Niño could increase global surface temperatures by 0.18 to 0.36 degrees Fahrenheit (0.1 to 0.2 degrees Celsius), depending on the intensity of the event, said Wenju Cai, a climate scientist at CSIRO Marine and Atmospheric Research, a government research organization in Aspendale, Australia.

When an El Niño occurs, the equatorial eastern Pacific Ocean experiences several months of higher-than-average sea-surface temperatures. Since 1950, years during or just after an El Niño were hotter than average because this surface ocean warming adds to the planet's overall temperature, according to NASA records.

Here's how it works: An El Niño pumps up heat from deeper ocean layers to the surface. Then, some of the ocean's resulting surface heat is released to the atmosphere, warming the air.

Most of this stored ocean heat comes from sunlight, but the release adds to the overall rise in temperatures caused by global warming, Cai said. "There's no doubt the underlying trend is caused by greenhouse warming," he said.

However, the record-setting temperature record may not occur until 2015. The fever from El Niño tends to lag a few months behind the start of the associated climate event, so the heat may not hit next year. During the 1997 El Niño, the Pacific Ocean heating kicked off in May 1997, but global temperatures peaked in 1998, at four times above average.

"Usually, the increase occurs more toward the latter part of the El Niño, when there is a mini-global warming," said Kevin Trenberth, a climate scientist at the National Center for Atmospheric Research in Boulder, Colorado.