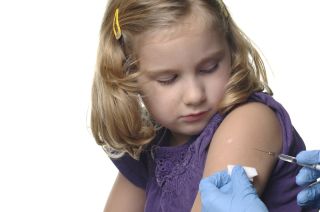 The chickenpox vaccine has greatly reduced cases of chickenpox in the U.S. experts say.
(Image: © Vaccination photo via Shutterstock)

The rate of the painful skin condition shingles appears to be rising in at least some parts of the United States, leading many to wonder why.

Although shingles is related to chickenpox — the varicella zoster virus causes both — experts say the rise in shingles is not linked with the use of the chickenpox vaccine.

In fact, children who receive a chickenpox vaccination have a much lower risk of getting shingles later in life than those who are not immunized, said Dr. William Schaffner, doctor of preventative medicine at Vanderbilt University Medical Center in Nashville, Tennessee, and a leading infectious disease expert.

Although chickenpox vaccines do contain a weakened version of the live virus, which can reactivate later in life and cause shingles, this is very rare, he said. "Nearly 99 percent of children who receive the vaccine will not get chickenpox at all," Schaffner told Live Science. "The remaining 1 percent who do get it will get a much milder version of it. Therefore, a vast majority of people receiving the immunization will not develop shingles later in life."

Once someone recovers from chickenpox, the virus remains dormant, but can reactivate years later, causing shingles, which is characterized by a painful rash, often on one side of the face or body. About half of all cases of shingles occur in people ages 60 and older, according to the Center for Disease Control and Prevention (CDC). [5 Dangerous Vaccine Myths]

The CDC recommends that children receive two doses of the chickenpox vaccine, the first at age 12 months or 15 months, and the second between ages 4 years and 6 years.

Before the chickenpox vaccine was introduced in 1995, Schaffner said, about 4 million people in the United States, mostly children, got the disease each year. Since then, there has been at least a 90 percent drop in cases.

But while the number of cases of chickenpox has declined dramatically, the rate of shingles appears to be rising in areas where it has been studied, Schaffner said. He noted that the United States does not keep national data on shingles; doctors are not required to report cases of the condition.

A few other things could explain the rise in shingles cases, Schaffner said. "People are living longer and therefore have more opportunity to contract shingles," he said.

But the rise is not linked to the vaccine. "Today's adults who are getting shingles are clearly getting it from the latent chickenpox virus that they acquired as children, and not from the vaccine, which wasn't around when they were young," he said.

Although chickenpox results in merely a mild inconvenience for the vast majority of children who get the disease in developed countries such as the United States, there can be serious complications in rare cases, Schaffner said. "A small percentage of children can develop encephalitis, an infection and inflammation of the brain," he said. Another complication is an infection of the chickenpox blisters, in which strep bacteria can get into the bloodstream, he said.

"I would absolutely recommend that parents immunize their children against chickenpox," he said.