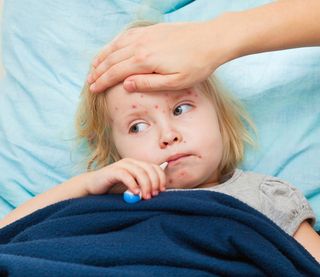 (Image: © Child with chickenpox via Shutterstock)

Children who get chickenpox may be at increased risk for stroke soon after the infection, a new study from the United Kingdom suggests.

The study analyzed information from 49 children who were followed for about 6.5 years, and who experienced both chickenpox and stroke at some point during the study period.

Children were four times as likely to have  a stroke during the six months following infection with chickenpox, compared with their risk at other time points during the study.

However, stroke in children is rare — about 6 out of 100,000 children under 15 have a stroke each year, according to the National Stroke Association. That means that the risk that any given child will experience a stroke after chickenpox is quite small.

Still, the findings add to a growing body of research linking chickenpox with stroke. A 2001 study found that about 31 percent of children who had a stroke had chickenpox in the previous year, compared with 9 percent of all children had the infection in the last year. [7 Devastating Infectious Diseases]

Among children who do experience stroke, complications such as neurological problems are common, said the researchers from the London School of Hygiene and Tropical Medicine. More studies should be conducted to determine how chickenpox and other infections might increase the risk of stroke in children in order to identify strategies to prevent the condition, the researchers said.

The researchers gathered information from electronic health care records of millions of adults and children in the United Kingdom. No link between chickenpox and stroke was found for adults.

Because the study included only children who had experienced both stroke and chickenpox, it eliminated problems that might arise by trying to compare children who did and did not get chickenpox (who might have different underlying risk factors), the researchers said. Still, the study found an association, and cannot prove that chickenpox can cause stroke.

Heart problems (caused by birth defects), and conditions such as sickle cell disease and trauma to the arteries are known causes of stroke in children, according to the American Heart Association.

"The study illustrates that immunization against varicella is important to reduce the risk of complications" from chickenpox, although they are rare, said Dr. Warren Lo, a neurologist at Nationwide Children's Hospital in Columbus, Ohio, who was not involved in the study.

Because of vaccination in the United States, chickenpox is not very common among kids in this country, said Dr. Otto Ramos, director of the Pediatric Infectious Disease Division at Miami Children's Hospital. (The chickenpox vaccine is not routinely given to children in the United Kingdom.)

A study published last year found that cases of chickenpox in the United States declined nearly 80 percent in the last decade, after introduction of the vaccine in 1996.

But cases do still occur, and Ramos said he will now be more inclined to look for a history of chickenpox or other infections in children who have had strokes and do not have other risk factors for the condition.

The new study was published Oct. 23 in the journal Clinical Infectious Diseases.