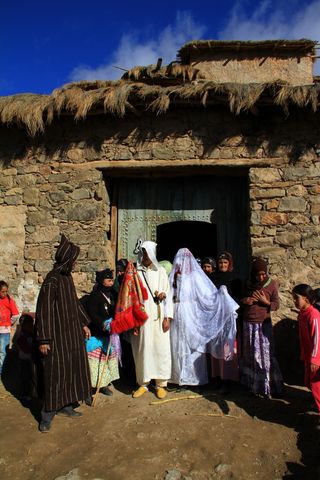 In agricultural or pastoral societies, marrying a close relative is linked to having more children.
(Image: © Born to Explore.)

Marrying a cousin is usually considered a bad idea, because inbreeding can lead to harmful genetic conditions. But paradoxically, in some societies, marrying a related spouse is linked to having more surviving children, research suggests.

In traditional residential societies, couples who were more closely related to each other had more children. By contrast, in migrant societies, related spouses had fewer direct descendants, the research revealed.

Pairing with close kin is known to reduce genetic diversity, which can result in the accumulation of severe and sometimes lethal mutations. For example, groups that commonly practiced intermarriage between relatives, like the British monarchy, had children with all sorts of nasty genetic problems. [I Don't: 5 Myths About Marriage]

Yet some research suggests an alternative perspective. "There's this counterintuitive finding that higher spousal relatedness is related to higher reproductive success in several humans societies," said Drew Bailey, a psychologist at Carnegie Mellon University in Pittsburgh, and co-author of the study detailed May 21 in the journal Biology Letters.

Even in modern, industrialized society, research suggests that people tend to marry others with similar DNA.

In the new study, Bailey and his colleagues examined 46 small-scale societies to compare the effect of inbreeding on the fitness of foragers and non-foragers. The non-foraging societies included horticulturalists, agriculturalists and herding populations, whereas foraging societies were primarily hunter-gatherers. The researchers defined fitness as the number of surviving children in the family tree.

Furthermore, the more family intermarriage in a society, the greater the benefit of intermarrying on the number of children couples had. In other words, in societies in which people frequently married their relatives, intermarrying showed a stronger link to having more children.

Keeping it in the family

There could be many explanations for the different effects of inbreeding shown in the two kinds of societies. Perhaps the best explanation, Bailey said, may be that non-foraging societies are more likely to have heritable resources, such as wealth or livestock, so a tight-knit family group might be more likely to defend each other and their shared resources. By contrast, in a foraging society, it might make more sense to be part of a much larger, interconnected group, since there are few or no resources to be inherited.

Another factor to consider is that in established, highly stratified societies, members of the upper class or royalty would have intermarried simply to preserve their social status. They may have also had more surviving children because they had greater resources for supporting these families. In fact, some combination of these explanations is likely, the researchers said.

Still, it's hard to untangle whether there's a causal link between inbreeding and producing more children, Bailey said. Also, because marriages between two closely related individuals are rare in hunter-gatherer societies, the study was based on a small sample, which could have skewed the results.