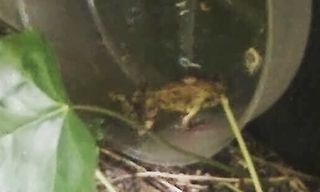 It wasn't only mice who appreciated the exercise wheels. Frogs, shrews and voles used the equipment, too.
(Image: © Yuri Robbers)

Caged mice aren't the only animals that enjoy a spin on the old exercise wheel. New video footage reveals wild mice, rats, and even frogs and slugs like running (or crawling) on wheels, too.

These strange findings come courtesy of a study that used motion-activated video cameras to monitor running wheels placed in areas where wild mice roam. The study aimed to determine whether caged mice run on the wheel because captivity has made them neurotic, or if wheel-running is just fun for animals.

"The main concern that has been put forward by many [researchers] is that, 'Is this is an unnatural behavior, an artifact of captivity, or is it something that could occur more naturally?'" said study researcher Yuri Robbers of Leiden University Medical Center in the Netherlands. "That issue, I think, we've laid to rest."

Scientists have used wheels to study exercise in lab rats and mice since the 1800s, Robbers told Live Science, but researchers always had some niggling concern that the behavior was compulsive or neurotic, rather than natural and healthy. If mice run on wheels because they are stir crazy, it would have implications both for research ethics and for studies that treat wheel running as a healthy way to exercise. [The 12 Weirdest Animal Discoveries]

Robbers and his colleagues were conducting studies on the circadian rhythms of wild animals, and decided to piggyback on that research by adding exercise wheels to their field sites. They chose one spot in a green urban area, and another site in a sandy dune area that is not accessible to the public. Thus, one area had lots of human influence, and the other, almost none.

Scientists equipped the wheels with video cameras set to begin recording if the wheel moved. At first, researchers baited both sites by placing food nearby to attract animals, but the researchers later stopped providing food at one site to see if animals would still come to run.

The resulting videos showed that if you build a wheel, the mice will come … and so will the shrews, voles and snails. In the first 24 months of observations at the urban area, there were 1,011 instances of wheel-running, 734 by mice. A 20-month period in the dunes revealed 254 observations of wheel-running, 232 by mice. The researchers even saw a bird hop on the wheel, Robbers said. [Watch Video of the Wild Wheel-Running Animals]

"But the bird just jumped on top of the wheel and accidentally made it move, it seemed, so we were not counting that," he said.

The researchers counted slugs and snails that entered the wheel and moved it in at least a full circle; some slimed around the wheel for hours, Robbers said. However, the researchers suspect the behavior was less than deliberate.

"It is known that there are invertebrate animals that play, so we can't completely discount it," he said. "But it seems unlikely."

More to the point, mice seemed happy to hop on the wheel voluntarily and give it a spin. About 1.7 percent of mice visits to the site led to a bout of wheel running, Robbers said. (The number was 0.4 percent of visits for all animals.) After researchers removed the food from the urban site, the number of visits that led to wheel running quadrupled, he said. And some of those runners were mice so young they wouldn't have been born when food was last put nearby.

"It seems that they see the running as rewarding in itself, or maybe as a form of play," Robbers said.

The wild mice reached speeds similar to what has been seen in lab mice, and they ran comparable amounts of time  — ranging from about one minute to 18 minutes.

Healthy behaviors can sour into unhealthy ones if they're overdone, so mice in the lab could still be vulnerable to obsessive running, Robbers said, but the new research does suggest the behavior is not necessarily abnormal. The next step is to try to figure out the motivation for wheel running in rodents, he said.

The research appears today (May 20) in the journal Proceedings of the Royal Society B.