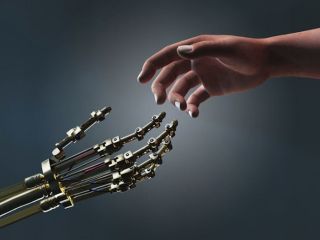 Humans are increasingly exposed to robots in their daily lives.
(Image: © photobank.kiev.ua | Shutterstock)

WASHINGTON — Some people envision a grim future in which machine intelligence exceeds that of humans, and "Terminator"-style robots take over the world. But robotic technologies don't have to evolve at the expense of humans, one expert says.

"The purpose of technology is to enable human ability," Cori Lathan, founder and CEO of Maryland engineering firm AnthroTronix, told an audience here at a two-day conference hosted by Smithsonian Magazine, called the "Future is Here," celebrating science fiction, outer space and the technologies of tomorrow.

“What will technology allow us to do in the future, or what will it force us to do?” Lathan said. She foresees positive developments. "I’m a techno-optimist."

Lathan grew up as a so-called maker, creating robots for children with cerebral palsy. Then came a spurt of advances in consumer electronics. Lathan started developing robots that could engage with kids with autism.

Today, wearable tech and computing power are advancing rapidly. One area that can leverage these technologies, Lathan asked, is health and medicine.

When a person goes to the doctor, the physician will take their temperature, measure their height and weight and take their blood pressure. But what about measuring mental health?

“We’re ignoring our brain,” Lathan said. If doctors could track brain health over time, they could detect changes, such as concussions, depression or Alzheimer’s disease.

While mind-reading technology may be far off, brain-computer interfaces are becoming more and more sophisticated, Lathan said. What if someday soon, a smartphone could record a person’s emotional state and display it to others? A teacher could gauge students’ attention, and a CEO could do the same with employees, Lathan said.

In the future, robotic caretakers, similar to the robot Frank in the 2012 film "Robot & Frank," could help elderly people combat mental deterioration. If such robots could keep humans mentally sharp, they could radically change the aging process, Lathan said.

Lathan’s own father was showing signs of cognitive impairment, and was diagnosed with sleep apnea, a disorder that disrupts breathing during sleep, which prevents the brain from getting enough oxygen. A machine called a CPAP (continuous positive airway pressure) could keep her dad breathing smoothly, but she found he doesn’t always want to use it.

While a smartphone app could help Lathan’s father, what he really needs, she said, is a robot like Frank.