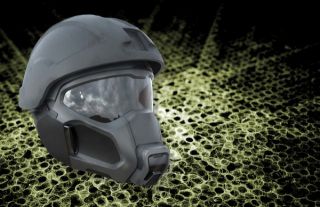 Don't be a hothead: The Army's new helmets will keep soldiers cool in a battlezone.
(Image: © U.S. Army)

Keeping cool in the heat of battle could soon be easier, thanks to a new U.S. Army helmet that has its own built-in air-conditioning system.

The high-tech headgear, which has been compared to something out of the video game "Halo," provides chemical and biological protection through a powered air-purifying respirator. The mask keeps soldiers supplied with cool, fresh air, because, let's face it: Things can get pretty heated in a war zone.

The Army's Edgewood Chemical Biological Center started designing next-generation respirators in 2013. Traditional respirators are heavy and bulky, but the new design is much lighter, uses less power and is more comfortable to wear, its developers say. [7 Technologies That Transformed Warfare]

The helmet consists of a face mask, connected by a hose to a blower unit, and a battery pack that hangs from the soldier's hip or back. The blower sucks air through a filtration system on the side of the mask, creating a flow of air across the face. When the wearer exhales, the valve closes and shunts the filtered air into the mask's eye cavity, to prevent any outside contaminants from infiltrating the mask if there's a break in the seal.

Scientists tested the technology with a modified version of the Army's M50 joint-service general-purpose mask, and found it performed as effectively as the currently used modelduring crawling, running, rifle exercises and combat maneuvers. The futuristic helmet was also more comfortable, according to Army officials.

Researchers at Edgewood will continue to improve designs for new helmets and communication systems, military officials said. For instance, they are investigating ways to make a mask that can sense when to turn the fan on or off by monitoring the soldier's physiology.