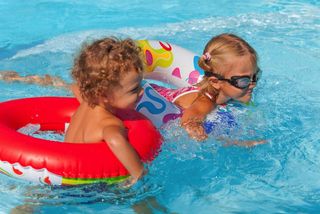 (Image: © A little girl and a little boy playing in the pool with rubber rings. via Shutterstock)

When the summer weather gets really hot, nothing feels better than jumping into a lake or a pool filled with refreshing sky-blue water, but you may want to think twice before you take a dip.

That enticing water may be teeming with bacteria and parasites that could spoil your summertime fun.

This is why experts advise that when swimming, people should avoid swallowing water in pools, lakes and other freshwater sources, in order to prevent illness.

"One of the worst offenders is the kiddie wading pool," Dr. Christopher Ohl, professor of infectious diseases at Wake Forest Baptist Medical Center, said in a statement. "Warm, shallow water and kids in swim diapers — which don't do a good job of containing feces — can create a perfect breeding ground for water-borne infections, even though the water is chlorinated." [7 Common Summer Health Concerns]

Parents should try to prevent their kids from swallowing water, Ohl said. And kids who have recently had any kind of gastrointestinal illness should be kept away from water for several days, so that they don't contaminate the water.

Public pool water can be a source of harmful germs such as E. coli bacteria and the parasites cryptosporidium (crypto) and giardia, which tend to spread when there is not enough chlorine in the pool, or the pH levels are too low. Some of the symptoms that may a result from infection with these three organisms include diarrhea, stomach cramps, weight loss, nausea, vomiting and dehydration.

But even if a pool does smell of chlorine, it does not mean that it is devoid of nasty bacteria and dirt.

"Many people think that when a pool smells of chlorine, that means that it's clean," Mary Ostrowski, director of the Chlorine Issues at the American Chemistry Council, a trade organization, told Live Science in a 2010 interview. "But that smell is actually chloramines, a substance that results from a mix of chlorine and bacteria, urine and sweat." A really healthy and clean pool would not have an odor at all, she said.

There are other organisms in pools and lakes that can make people sick. Freshwater lakes and streams can contain a type of bacteria called leptospirosis, which comes from the urine of mammals that drink the water. (Animals tend to pee into the same water they drink.)

Some of the leptospirosis infection symptoms include fever, headache and muscles aches, but the condition is usually treatable, Ohl said.

Naegleria, a rare but deadly brain-eating amoeba, is another threat, which tends to lurk in warm, stagnant water. To avoid contracting the amoeba, swimmers should avoid jumping feet first into warm ponds, particularly if the summer is really dry, Ohl said. When someone jumps feet first into a pond, water can get into the nose, which can act as a channel through which the amoeba can enter the brain.